Who Will Watch the Watchers?

If you're in San Francisco this week or plan to attend the Newport Beach Film Festival next week, I recommend that you add The Whistleblower to your schedule.  This fact-based political thriller dramatizes the story of Kathryn Bolkovac, a United Nations International Police Force monitor who risked her job and her life to expose a human-trafficking ring operated by employees of private security contractor, DynCorp, in Bosnia during the late '90s. 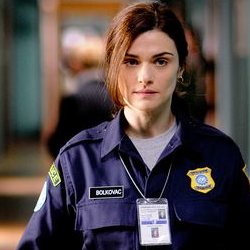 The film was co-written and directed by first-timer, Larysa Kondracki, and features Rachel Weisz in one of her finest performances.  Monica Bellucci, Vanessa Redgrave and David Strathairn round out a solid cast.   Kondracki, a Canadian of Ukrainian origin, spent two years in Europe researching the subject of her film.  She proves to be as brave as the real-life heroine, and doesn't flinch in her straight forward depiction of a very sordid subject.
Bolkovac was a police officer in Lincoln, Nebraska, when she decided to accept a highly paid job as a UN peacekeeper in order to earn enough money to move closer to her daughter, then in the custody of her ex-husband.  Once in Bosnia she quickly gets promoted to the UN's Gender Office, which oversees sexual assault investigations.  While there she must persevere against the boys club atmosphere of her fellow peacekeepers and navigate the cultural complexities of working with a corrupt and sexist local police force.
She uncovers evidence of a sex-trafficking ring operated by peacekeepers from her own employer and kept under wraps by the complicity of UN authorities at the highest levels of the international operation.  Nevertheless Bolkovic puts her career and her life at risk by seeking justice for the young girls victimized by the very people who were sent there to protect them.

The subject matter of this film is disturbing and some scenes are hard to watch, but it is well worth your attention.  See it for the great performance by Weisz, or because it is a remarkable achievement by a first-time filmmaker, or see it because we all need to be fully aware of the price others pay when we fail our mission.
The Whistleblower is scheduled for a US theatrical release in August 2011.

Posted by Mark Dispenza at 10:36 PM No comments:

In case you missed the original 1999 release of director Mike Leigh's cinematic masterpiece, Topsy-Turvy, you now have another excuse to see it.  The Criterion Collection has just come out with a digitally remastered version, including Blu-Ray, with extended commentary and interviews.
Topsy-Turvy is perhaps the best film ever made about the staging of a major theatrical production.  A terrific ensemble cast led by Jim Broadbent and Allan Corduner, as famous playwrights W.S. Gilbert and Arthur Sullivan, delivers an imaginative, richly detailed look at the personal and professional challenges behind the original staging of the comic opera, The Mikado.

Mike Leigh achieved a rare combination of cinematic beauty and historical detail with this film, populated by richly developed characters.  To be perfectly frank, the set-up in the first 30 minutes is a bit slow-moving, and I don't think I would have missed it, but I urge you to stay with it.  By the time you're well into the first hour of this story, you'll be completely hooked.  Buy it, reserve it on Netflix--do whatever you have to do.  Just see it.  If you've already seen it, it's time to pay it another visit.
Posted by Mark Dispenza at 11:27 PM No comments: