One of the films I couldn't fit into my schedule at the Palm Springs International Film Festival this year was 18 Years Later (18 anni dopo), an Italian film that generated great buzz among audience members there.  My frustration at missing the film was finally relieved when I attended this week's screening at the Italian Institute of Culture in Los Angeles.  The IIC screening room was packed with what I am told was the largest crowd for a screening there in recent memory.
18 Years Later is the story of Genziano and Mirko, two brothers who have not spoken to one another in the 18 years following the tragic car accident that killed their mother.  Upon his death their long-suffering father gets his wish to bring his shattered family back together via an ingenious and resourceful provision in his will.  The two brothers must deliver his ashes to the graveside of their mother in the restored antique Morgan in which their mother died. 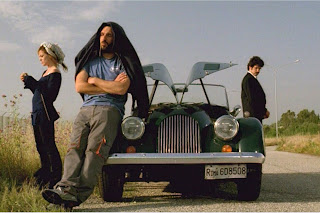 Despite the serious story line, this bittersweet Italian comedy is a very entertaining and cathartic film.  It is packed with memorable characters and never degenerates into blatant manipulation of audience emotion--something Hollywood can learn from.
18 Years Later was a long journey for actor/writer/director Edoardo Leo and his long-time close friend, co-writer and co-star, Marco Bonino.  Friends since childhood, they wrote the first draft of the screenplay 10 years ago with the objective of playing the lead roles.  After multiple rewrites in both English and Italian, with Marco's wife assisting in the translations, and several false starts between Hollywood and Rome (actor Peter O'Toole was attached at one time to play the grandfather), the two amici finally raised enough money to shoot it themselves.  The result was worth that long, hard development hell.
This is a beautiful film about family, guilt and forgiveness.  It's a story that resonates with many people.  My youngest sister and I stopped talking a decade ago in the aftermath of our own mother's sudden and traumatic death under different circumstances.  We started talking to each other again little more than a year ago, and I'm very happy we did.  Our journey to self-healing, like Genziano and Mirko's, is hard but ultimately worth the effort.
Despite highly favorable audience reaction during the film's few screenings in this country, Marco reported during the IIC Q&A on Tuesday that the film has yet to be picked up in the USA, although it is being distributed throughout Europe, Australia and other places.  I hope that the situation will be remedied soon, so that you can see this film on the big screen.
Posted by Mark Dispenza at 11:22 AM 1 comment:

Writer-director Tom McCarthy has been a favorite among independent film buffs since he took the Sundance Film Festival by storm with The Station Agent in 2003.  His follow up film, The Visitor, put a human face on the immigration debate and reignited the already illustrious career of longtime character actor, Richard Jenkins, who subsequently went on to play a prominent role in the Julia Roberts vehicle, Eat Pray Love. For his third outing as writer-director, Tom has teamed up with actor Paul Giamatti to deliver a wonderful story that is both satisfying and real. 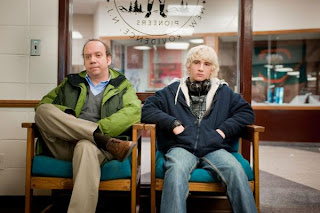 Win Win is about Mike Flaherty (Giamatti), a good man who makes a bad choice and then pays for it when things get complicated.  The bad choice comes when he lies to the court to gain the guardianship of Leo, a senior suffering from dementia, for the sole purpose of getting the paycheck that comes with that responsibility.  Flaherty's law practice is going under financially, a fact he has kept from his family.  The money from the guardianship will allow him to keep the critical bills paid.
The complication comes from the unexpected arrival of Leo's long lost grandson, Kyle, perfectly played by 16-year-old newcomer, Alex Shaffer.  Kyle doesn't have a father, and his mother's penchant for abusive substances and boyfriends has finally taken its toll.  Flaherty has no choice but to take Kyle in.  Flaherty's wife, superbly played by Amy Ryan, is suddenly having to deal with a lot of problems she doesn't understand and didn't create.
Flaherty is also the coach of the local high school wrestling team, which much like his law practice, isn't going anywhere.  It's not long before he discovers that Kyle is a genuinely gifted wrestler who can give Flaherty's losing team a real shot at a state title game. With that seemingly impossible goal finally in sight, the web of deception unravels, putting at risk his relationship with Kyle, whom the entire Flaherty family has grown to love.
This is Shaffer's first film.  He is an actual high school state wrestling champion and infuses the sports scenes with a strong dose of reality.  He is also a convincing actor and someone to watch in the future.


This is a timely story about a man who makes a bad choice under financial pressure and must pay the consequences when he is finally forced to come clean.  He gets back on the right path at the end, but that path is a hard one, something this film doesn't shy away from.  It's not a Hollywood ending.  Flaherty is not suddenly going to get rich and the wrestling team may not go to the state finals, but it is a real ending and ultimately much more satisfying.  It's what being human is all about.
Win Win opened yesterday in select theaters.  Don't miss it when it comes to your town.
Posted by Mark Dispenza at 6:13 PM No comments: