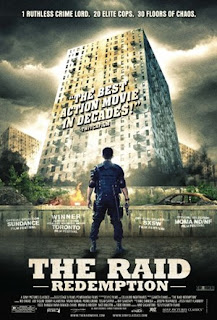 A Kick of Adrenaline

While light on plot, Gareth Evans' The Raid: Redemption more than compensates in its stylized and non-stop tour de force action.

Like Die Hard, The Raid centers around one man on a mission. At the outset that isn't completely accurate since Rama (Iko Uwais) is joined by a cavalcade of cops. Their mission is to enter into the decrepit apartment building and capture drug kingpin, Tama (Ray Sahetapy). The problem is Tama has the building completely wired with intercoms and cameras. He throws out the promise of "free rent for life" to tenants who are able to stop the intrusion. With the call to arms, the building that has housed many drug dealers and murders comes alive. Gunfire erupts upon Rama and his team, sending most to the morgue within a matter of minutes. 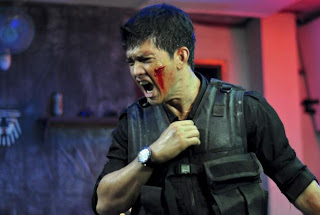 As the numbers are narrowed, The Raid slips into video game mode, with each new level bringing on a different set of bad guys and a different style of fighting. Guns on the first few levels, knives and machetes on the next couple of levels, and last but not least, the biggest fight of all between Rama and Tama's most hardcore of henchman, the aptly named Mad Dog (Yayan Ruhian). He is one that believes using a gun is like "ordering take-out." He'd rather fight someone with some real skill, that of Pencak Silat, the Indonesian style of martial arts.

There are a couple twists and turns along the journey, but mostly they are there to service the cliches of the genre. Corrupt cops, brothers on opposite sides of the law and a pregnant wife awaits our hero back at home. Viewers who are subtitle-phobic shouldn't worry, as the dialogue is minimal, only peppered in to add a little breathing room between non-stop escalating battles and violence.

Evans effectively captured the lost art of a well-crafted fight scene. American films tend to have the camera in close, handheld and constantly cutting to give the feeling of intense action in an otherwise poorly executed fight scene. Evans pulls the camera back from the action and lets it follow smoothly along corridors, hallways and rooms where the action takes place. Each punch, kick, stab and swing of a weapon is felt with force as the scene plays out without a cut every fraction of a second. If the film was a series of rapid cuts, the viewer would be left dazed and confused within the first thirty minutes of the almost non-stop action.

Like the many action stars before him, Iko Uwasis should find steady work within the genre. He has charisma and the chops to pull off some of the more elaborate action set pieces. And since Sony Classics decided to add on the "Redemption" part to the title (considering no character is really redeemed), hopefully there are plans to continue on the franchise with the few remaining actors at the end of this non-stop blood bath. But don't let the words "blood bath" scare you away. If you can handle the opening execution by Tama where he runs out of bullets before his last victim, leaving him only a hammer to end it, you can make it through The Raid.