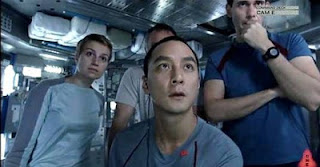 Into the Abyss
by Mark Dispenza

With space exploration at low ebb in the USA, fans can reinvigorate the excitement of venturing into the unknown with Europa Report.

One of the few hard science fiction films to come along in recent years, Europa Report is a unique blend of science fiction with documentary-style filmmaking by Ecuadorian director Sebastian Cordero, a master of the contained psychological thriller.  The film was made by unabashed true believers in humankind's destiny to explore the universe and designed to appeal to fans of the films that inspired it, such as 2001: A Space Odyssey, 2010 and The Abyss.

Cordero and his director of photography, Enrique Chediak (127 Hours), positioned eight cameras inside a spacecraft mock-up to create the illusion of witnessing the live feed from an actual space mission.  The effect brought me back in time to my childhood, watching Walter Cronkite's coverage of the Apollo 11 mission to the Moon. 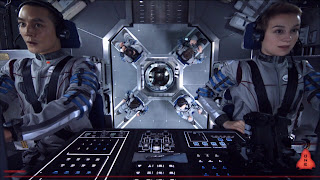 The story revolves around a private enterprise space mission by Europa Ventures to send humans to explore the vast liquid ocean below the thick ice of Jupiter's large moon, Europa.  They hypothesize that there is some type of rudimentary life to be discovered there and assemble a crack team of the best astronauts from around the world to pull it off.

The mission is a long shot and fraught with peril, as once the crew covers the vast distance to Europa and achieve orbit, they will be called upon to land on top of the ice and drill beneath it to detect what is hidden below.

The dangers are obvious and the story doesn't miss any of them, borrowing a little too heavily from the films it pays tribute to, namely 2001, 2010 and even The Abyss, the latter of which doubtless inspired the edge-of-the-seat tension through much of the film. 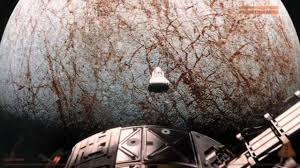 The lack of originality was my biggest problem with the story, but it was not enough to preclude my enjoyment of it or appreciation of its cinema verite approach to narrative.  I'm one of those space exploration fans who grew up with Star Trek, and with Hollywood going off the deep end of pushing the action and special effects envelope, I enjoyed the illusion that I was witnessing something that could truly happen at some point in the future.

Writer Phil Gelatt did a lot of research to inject reality into the storyline, including interviews with NASA scientists and engineers.  "One of my favorite moments in pre-production came out of a conversation with Steve Vance at JPL," he said.  "I asked him if a manned mission to Europa was possible today, and he said, 'Yeah, just give me a couple billion dollars.'  It was a reminder that many of our limitations are simply about a lack of will."

One of the other things I loved about this film was its embrace of a positive future for humanity.  The media loves to go for the ratings these days by concentrating on stories about hatred and killing among different ethnic groups and nationalities. I don't think there was a single member of the crew on this spaceship from the same country, and yet there was no tension at all based on their differences.  In fact, I cannot recall a single line of dialogue addressing which country a character hailed from or tension arising from the crew's diversity.  This is a crack team, and they have each other's back.

It also didn't hurt that the cast was assembled from some of the best actors from around the world, including Sharlto Copley (District 9) and Embeth Davidtz (The Amazing Spider-man) of South Africa, Michael Nyqvist of Sweden (The Girl with the Dragon Tattoo), Karolina Wydra of Poland (Crazy, Stupid, Love) and Romanian Anamaria Marinca (4 Months, 3 Weeks and 2 Days) and Chinese-American Daniel Wu among others.


Europa Report is currently available in pre-release download from iTunes, and will be distributed theatrically beginning August 2.

Posted by Mark Dispenza at 9:44 AM