Faces of the Modern Warrior

It comforts us to believe that our all-volunteer military is populated by young men and women who choose willingly to march into the valley of death to preserve our American values and way of life, but as in most human endeavors, the truth is far more complicated than that, and perhaps uncomfortably revealing of who we are as a people.
Several outstanding films have been released over the past few months that put a face on our modern warriors and their experience of war in Afghanistan.  Like most powerful films, none of them take an official position on the war itself, leaving it to viewers to draw their own conclusions.  What emerges instead are revealing portraits of those who fight our battles for us, often at great personal cost.
The most famous of these is Restrepo, nominated for Best Documentary Feature at this year's Oscars and at the Independent Spirit Awards, among a host of other honors.  Over the course of a year, documentary filmmakers Sebastian Junger and Tim Hetherington embedded with a platoon of US soldiers in the embattled Korengal Valley.  There are no interviews with generals, politicians or political pundits--just 90 minutes with ordinary soldiers on the front lines, observing the experience through their eyes.  It's the closest you'll come to the experience of a US soldier in battle without actually being there.
The average soldier used to serve a year or two of enlistment before discharge.  Now that soldier can be called back into the combat zone for up to three separate deployments.  Post Traumatic Stress afflicts veterans in the hundreds of thousands, and the Veterans Administration barely acknowledges the repercussions--broken families, maladjustment to civilian life and suicide, among others.
Restrepo provides a window into an experience that our soldiers can't seem to talk about but can't stop reliving.  During a Q&A at the Santa Barbara International Film Festival, filmmakers Junger and Hetherington spoke about the thanks they received from family members who now have at least some concept of what their deployed loved ones have been through, an experience Junger referred to as "meat going through a grinder."

War creates a strange brotherhood, and that was brought sharply home to me by watching Paul Refsdal's film the day after I saw Restrepo for the first time.  Refsdal is a Norwegian journalist who has made a career of embedding with insurgent units around the globe, not something a journalist from the USA or UK can readily do  Taliban - Behind the Masks is Restrepo from the other side.

What struck me most about watching those two films is just how similar the soldiers in the field are to each other, no matter which side they're on.  There are those who sign up for family honor or because they are true believers, but by far most of the recruits are working poor just trying to survive and improve their lot in life.  They fight for promises that in exchange for taking up arms, their leaders will take care of their families and improve their prospects. 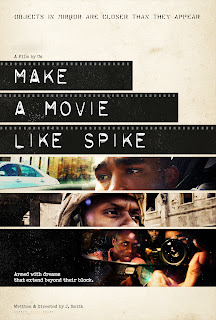 Two low budget feature films that debuted this year, the first at the Santa Barbara International Film Festival and the latter at Sundance, cast a light on those who fight and why.   Make a Movie Like Spike, the debut feature of writer-director and actor, Jamil Walker Smith, follows the last 36 hours of two childhood friends before they ship off for Afghanistan.  The ultra-low budget production at first appears deceptively chaotic, like somebody's home movies spliced together, but appearances are deceiving.  By the film's conclusion you'll know you've seen a very effective and hard-hitting portrait of modern warriors.  Smith is best known as Sgt. Ronald Greer of the television series Stargate Universe, a role in which he brings much depth to what could have easily been a one-dimensional character.  His talents as both an actor and a filmmaker are very much in evidence here.

Benavides Born is not a film about the war in Afghanistan, but it does offer an intriguing and effective glimpse into Uncle Sam's most fertile recruitment ground.  The film follows Luz Garcia, a teenager in a small Texas town where economic prospects are few.  Luz struggles to get into college on an athletic scholarship to avert a future mired in hopeless poverty.  Her older brother has enlisted and been deployed to Afghanistan--a fate she seeks to avoid for herself. 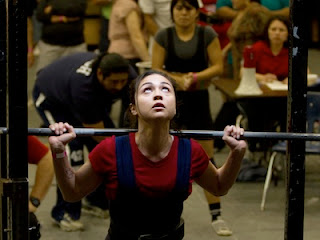 Filmmaker Amy Wendel and her co-writer, Daniel Meisel, interviewed locals in Benavides, Texas, over a two-year period to create the rich world of the film.  Although it is a work of fiction, Wendel told audiences at a Q&A in Santa Barbara that many locals were used in the production, and that many of the scenes in the film were recreated from actual experience.
Some of those images are disturbing.  Military recruiters roam the halls of the school, talking to any kid who will listen about the great opportunities available through military service.  In case that doesn't work, local law enforcement officers routinely show up at the local high school to perform surprise classroom inspections with drug-sniffing dogs.  Of course, the lack of sound judgment and drive to experiment that defines the American teen means the lawmen always turn up violators.
You would think they would provide counseling for these young people and put them in rehab if called for, but what they actually do is incarcerate them for a few months and leave them with a felony record.  You can't get a good-paying job with the local oil company if you have a felony conviction, and since that's the only game in town if you don't want to spend your life in abject poverty, what's a teen to do, or a parent for that matter if the kid is under 18?  You guessed it.  You sign them over to Uncle Sam and send them to the front lines so the government will erase the conviction.

It's interesting that on the central coast of California where I live, you won't find military recruiters roaming the halls of local schools, and you don't commonly see military unit flags in the windows of the posh homes of the American Riviera, but go inland a few miles to working class communities like Santa Paula and Fillmore, and you'll see those flags in large numbers.
In countless interviews I've heard soldiers say they joined up to earn career advancement, or to go with their buddies to keep them out of harm's way.  It's amazing how war can take the noblest of human values--the aspiration to better oneself, love for those closest to us--and grind them up into something terrible.
Posted by Mark Dispenza at 9:33 PM