Two Gems from the Land Down Under

The Santa Barbara International Film Festival hosted the world premiere of two outstanding films this past week from the lands down under.   Face to Face won the festival's  prestigious Panavision Spirit Award for Independent Cinema, a well-deserved honor in my opinion.  Working from his own adaptation of the David Williamson play, Australian director Michael Rymer shot the film in only 12 days, with virtually the entire story taking place in a single room. 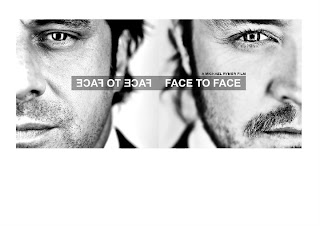 The story opens as 10 obviously angry people sit facing each other in chairs only a few feet apart, a distance that might as well be the Grand Canyon.  Soon we learn that the young man with the belligerent attitude had earlier beat up his foreman and deliberately rammed his vehicle into a car driven by the owner of the company.  The individuals in the room are there to meet with an arbitrator at the pleading of the young man's mother, and a successful arbitration is the only thing standing between the youth and a likely prison sentence if the case goes to court.  It's clear that no one, except perhaps the arbitrator and the boy's mother, really wants to be there.
What seems at first to be a clear-cut case of a foolish youth acting out, turns into something else entirely as each person in the room shares his or her piece of the story.  The reality that ultimately emerges is at times very funny and at times poignant, enhanced by the powerful performances of the Australian A-list cast in the tradition of 12 Angry Men and Executive Suite.
During the three years I lived in Japan in the 1980s, I was told that the first thing the Japanese police do when they arrive at the scene of an auto accident is have each party apologize to the other before any discussion of fault begins.  When I returned to the United States and observed how quickly we Americans fly off the handle over the tiniest things, the wisdom of that approach was clear to me.  Face to Face reminds us how insensitive we can be to those around us, and that we are usually complicit in the misfortunes that result. 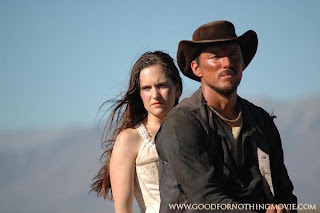 Just when I thought there can't possibly be another spin on the western genre, a film like Good for Nothing pops up from New Zealand and shows me just how wrong I can be.  I'd like to call this "kiwi western" a cross between a Sergio Leone spaghetti western and Blazing Saddles, but that really doesn't do it justice.
Shot entirely in New Zealand, this story of the American west features a cast of wonderful character actors, a vintage train, wide open New Zealand country that looks just like the old west, authentic costumes, and even a Maori actor who so convincingly embodies his role as an Indian that one woman at the Santa Barbara Q&A that  followed a screening asked writer-director Mike Wallis how he found a Native American actor in New Zealand (no kidding).
In this debut film, Wallis pays homage to Leone by precisely replicating his visual and dramatic style, while simultaneously turning it on its head and poking fun at it.  Even the silent, macho man-with-no-name outlaw so perfectly embodied by Clint Eastwood in the Leone films, and so well recreated here by actor Cohen Halloway, is hard to take seriously when he turns out to have a debilitating case of ED.
Good for Nothing looks big budget, but according to Wallis, he and his crew shot it for the price of a car (and not a luxury car).   I can't possibly describe this wonderfully entertaining film in a way that will do it justice, so I'll just end with a strong recommendation to find out where it's playing next and see it for yourself while it's still on the big screen.  Don't wait for the DVD!