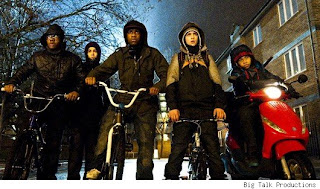 The boys in the hood take on monsters from outer space in Attack the Block, the most entertaining movie I've seen all year.
Attack the Block is an unusual hybrid of science fiction, horror, comedy, action/adventure and social commentary that delivers equally on every level.  It has you jumping out of your seat in fright one minute and rolling out of it in laughter the next.  The film's sensitive and insightful treatment of its young subjects will move you, and it proves once again that compelling stories don't require mega-budget Hollywood effects to deliver a great action movie.
It all begins when alien creatures land near a South London tenement, and this time first contact is made with local teen gang members, unluckily for the aliens.  Gang leader Moses (John Boyega) ends up in a fateful confrontation with the first creature to land and kills it, inviting the wrath of the bigger and badder alien monsters that follow.  As the streets of the neighborhood descend into chaos, the boys fall back into their high-rise home tenement, the last defensible space against the deadly horde close on their heels.  What happens next is a terrific orgy of fright, laughs and thrills as young men evolve from street toughs into unlikely heroes.
Attack the Block has won the hearts of audiences in early screenings across the country, and has even inspired a cult following among fans who have taken to calling themselves "Blockheads."  The film took the Best Midnight Feature award at its US premiere at South by Southwest and followed with the Audience Favorite award at the Los Angeles Film Festival.  I confess that I've already gone out of my way to see this film twice and will have to sacrifice my personal dignity to the Blockhead label - all the more remarkable because this film does not release in the USA until July 29 and will be up against the Hollywood blockbuster, Cowboys & Aliens, on the same opening day in the same genre.
It's easy to see why the film has inspired such a following.  Everything about it is an astounding accomplishment.  It is the first feature film written and directed by Joe Cornish, a British television comedy writer and contemporary of Adam Buxton (The Adam & Joe Show) and Edgar Wright (Hot Fuzz, Scott Pilgrim vs. the World, Shaun of the Dead).  Wright is also executive producer of Attack the Block.  Cornish's talents have already caught the eye of one of his early idols, director Steven Spielberg, for whom he recently co-wrote the screenplay of The Adventures of Tintin with Wright and Steven Moffat (releasing December 23).  The script for Attack the Block is full of great dialogue, and I'm sure many of its wonderful lines are destined to be permanently enshrined in the pop culture lexicon of our times.
Cornish told an audience at a recent pre-release screening in Los Angeles that he based the concept of Attack the Block on favorite films and genres from his childhood, including Spielberg's E.T. and creature flicks such as Tremors, gang films (The Warriors, Rumble Fish), and siege films (Die Hard and John Carpenter's Assault on Precinct 13).  These influences are both positive and readily apparent throughout the film.  The catchy hip hop-inspired soundtrack is reminiscent of Carpenter's scores for his own films and features the remarkable work of first-timers, Felix Buxton and Simon Ratcliffe.  Visit the Attack the Block web site for a sample.
Cornish grew up in South London and wanted to make a film that would celebrate the good in the much-maligned youth of the neighborhood and inspire greater empathy.  As he told the Los Angeles audience, the trouble with the American genre films is that the aliens always land in the pristine suburban neighborhoods of American kids, whereas he wanted to level the playing field by having "Bad E.T." land in "one of our neighborhoods." 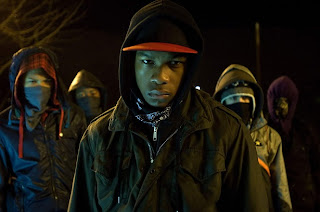 John Boyega as Moses
The film's cast includes the first-time appearance of 10 young actors from the age of 10 through the teen years.  All do a wonderful job and worked with Cornish to make the kids' slang as real as possible.  Most notable among them is lead actor Boyega, a 19-year-old prodigy (17 at the time the film was shot) who may be the British answer to America's Jennifer Lawrence in terms of sheer raw talent.
Boyega's Moses is a genuine and worthy protagonist, but like Lawrence, he actually hails from a far better hood than the character he plays, making his performance all the more remarkable.   He confessed during a Q&A at Comic-Con that he learned to play Moses by closely studying the actors in the fourth season of The Wire.  Cornish discovered Boyega in a small theatrical part and knew that he would be right for the role.  Attack the Block is Boyega's first film, and you can be certain that you will be seeing a lot more of this talented young man in the future.
In the midst of all the film's various elements is a wonderful coming-of-age story.  At the beginning Moses thinks becoming a man is about being a badass tough and asserting himself against all comers.  During the course of the story, he comes to realize that "actions have consequences," and it was his actions that put all of his friends at risk.  The only way to make things right is to own up to his responsibility and face the monsters himself in a final showdown at the conclusion of the film.  To do that he first has to make things right with Sam, the student nurse he and his gang mugged at the beginning of the film.  His plan for salvation will depend upon her.  He returns the ring her fiance had given her, the only thing of any value she had on her at the time, and then readies himself for the greatest test of courage he has ever faced. 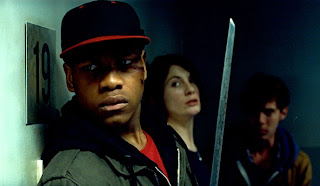 John Boyega and Jodie Whitakker
There are a number of performances of note among the adult veterans as well.  Nick Frost does such a great job of providing comic relief as Ron, the aging hippie slacker and operator of Ron's Weed Room, that I fear he may be forever type-cast into that role.  His spoiled suburban sidekick, Brewis, is played with equally great comic timing by Luke Treadaway, and Jumayn Hunter manages to infuse bad guy, Hi-Hatz, with such unusual depth for a one-note character that I could actually identify with him.
Sam is played by Jodie Whittaker, who does an outstanding job of providing the audience with a point of entry into the kids' world.  At the beginning, when she is confronted and mugged by the gang, she sees them as the image they want to project of themselves - bulked up by hoodies and masked, looking larger, older and more menacing than they actually are.  She fears them.  The circumstances of the alien siege forces her back together with them again, and with that closer association comes new insight.
In one of my favorite sequences, there is a collage of quick scenes that follow each of the boys as they race back into their apartments to "tool up."  Each of the kids' rooms and choice of weapons provides a window into their unique individual personalities and lifestyles.  We see a hodge-podge of impoverished homes headed by single parents, grandparents or other relatives, some of whom are never around to provide any real support to the kids.
During the intensity of the battle hoodies come off and all pretensions are stripped away.  Sam is surprised by the boys' youth and vulnerability.  As the layers of armor are gradually cast aside, she sees them as they really are--children, alone and scared, huddled together in mutual protection against the monsters that wait for them in the dark.