In the Wild West of Ireland 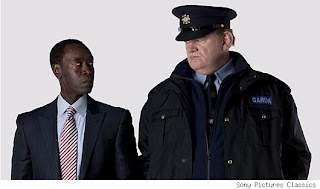 Brendan Gleeson and Don Cheadle are unlikely buddy cops in the  Irish action comedy, The Guard.
This is the first feature film written and directed by John Michael McDonagh, who also wrote the screenplay for the critically-acclaimed Ned Kelly in 2004, and it is an impressive debut by all counts.
Gleeson plays Sgt. Gerry Boyle, an independent and unconventional rural town cop in County Galway.  Boyle's politically incorrect mannerisms, devoid of the niceties of polite society, have a way of getting under everyone's skin.  He also has a penchant for booze and call girls. It suits him and everybody else just fine to keep him out of the spotlight in his quaint little town. 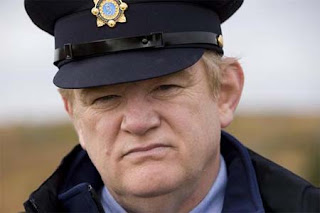 Brendan Gleeson
Boyle becomes the unwanted center of attention, however, when a criminal syndicate decides that his quiet little coastal burg is the ideal site to land a major drug shipment.  The tip-off comes from visitng FBI agent, Wendell Everett, played in wonderful humorless style by Cheadle.  Everett is a typical fish out of water, and his experience working with big, well-equipped task forces back in the USA, leaves him frustrated as corrupt Galway cops lead him on wild goose chases, and none of his prior experience prepares him for interaction with the Irish locals.
Despite his best efforts to avoid Boyle, Everett finds himself working more and more in league with the man he first believes is a racist moron.  The pairing of this unlikely duo is a terrific recipe for dark humor, action and mystery, and this film delivers each in spades.
In the service of full disclosure, I have to say that I am a huge fan of Gleeson, and I haven't missed anything he plays in since I first saw him liven the screen as the hapless Mickie Abraxas in The Tailor of Panama.  He is in great demand as a character actor and can often be seen in supporting roles in some of the world's most critically acclaimed films.  It's all too rare that he is the lead in a feature film, although he did make a terrific Winston Churchill in the television mini-series biopic, Into the Storm.  I certainly got my Gleeson fix in this very entertaining film, and to have him paired with the wonderful Don Cheadle is a tasty treat indeed.
The story in The Guard is well-constructed and evocative of American westerns and buddy cop movies, but it's the terrific casting that really makes this film.  In any story that builds to final confrontation between the good guys and the bad guys, the best feature bad guys that are in their own way just as powerful as the good guys.  Boyle and Everest are up against great antagonists, whose leader is played by Liam Cunningham, currently starring in the television series Game of Thrones (HBO) and Outcasts (BBC/ BBC America).  Mark Strong and David Wilmot deliver memorable performances to round out the evil trio. 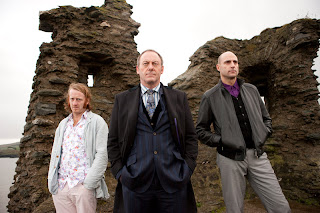 David Wilmot, Liam Cunningham & Mark Strong﻿
﻿
Fionnula Flanagan is priceless as Boyle's mother, and the chemistry between her and Gleeson is a wonder to behold.  You can easily see much of his mother in Boyle's unconventional character.
The dialogue in this film is very Quentin Tarantino-esque, and the wonderfully entertaining character banter sounds a lot like Pulp Fiction with an Irish brogue.  The dark humor is funny and the conversations will make you feel like you're eavesdropping on colorful patrons at an Irish bar after a few pints of Guiness have already been consumed.
The Guard is currently in release in the USA.