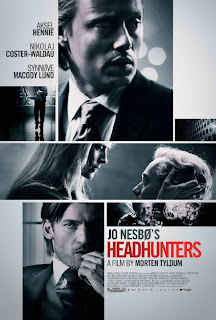 A Smooth, Albeit Short, Criminal
by Zac Sanford

Based on the novel by Jo Nesbø, Headhunters is a fun thrill ride that doesn't let up until the very end.  A stylish mix that delves into bits of slapstick, Headhunters is the latest in a line of Norwegian thrillers to hit the States since the runaway success of The Girl with the Dragon Tattoo.

Instead of hackers and disturbing images of rape, Headhunters deals in the fine art of stealing art.  In the days when Munch's famous painting, The Scream, fetches north of $120 million, the hero imagines finding a piece of art that could allow him to retire from the game and enjoy life with his gorgeous and way-out-of-his-league wife. 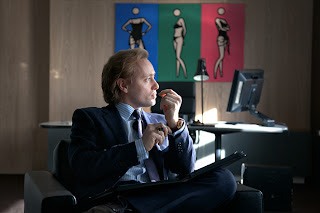 The hero, really an anti-hero, is Roger Brown (Aksel Hennie).  A short man with a Napoleon complex, Roger always tries to over-compensate in everything he does.  He has the lavish modern home, the luxury car, paintings worth more the most will make within five years or more and a wife (Synnøve Macody Lund) who towers above him by a good half a foot.  His job as one of the top headhunters in Norway, landing some of the biggest corporations to fill the holes in their executive staff, isn't enough to keep him from being neck deep in debt.  Instead he's swimming in it, and even his financial adviser tells him it's time to make changes in his life.

Instead of tightening the purse strings, Roger continues to live the lavish life, which he finances moonlighting as a high-end art thief.  He even has rules in place.  He never stays more than ten minutes.  He must case the place to be sure he's alone.  He must sell the painting off as soon as possible before the original is seen as replica.  This is all part of his mantra until one of two things happens - he's caught or he finds the painting that allows him to leave the game. 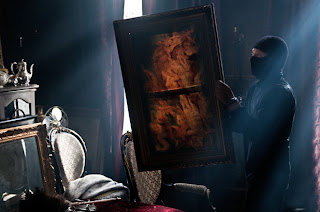 In walks Clas Greve (Game of Thrones Nikolaj Coster-Waldau), a recent transplant to the country who can use Roger's services.  Clas recently worked for a company that dealt with high end GPS microbes that allow the smallest device to be placed on a person without ever being known.  Sadly, his grandmother has passed away, sending him to Norway to renovate the apartment and find homes for the art collection, including a priceless Rubens painting that could fetch over $100 million.  Roger puts his scheme into motion and the tension and suspense ratchets up from here.

At the outset, Roger isn't a very likable character. The fact that he steals art is just the tip of the iceberg.  He's conniving and easily manipulates those around him.  And not only does he have the wife that he doesn't fully deserve, he has another woman that he keeps on the side, but will easily toss her to the side when she becomes too clingy.  But while everything seems to be going right, you just want to root for Roger to get his comeuppance... and boy does he.

Once Roger is able to get his hands on the Rubens painting, his life is quickly turned upside down, turning the film into a constant cat and mouse game.  As the tension mounts, the sympathy switches to that of the anti-hero, and with the constant barrage of events, once ould only root for him to come out on top.  This is where director Morten Tyldum really shines, racheting up the tempo of the story, not allowing the viewer to question the constant conveniences that are being thrown at us.  It isn't until a very (and I do mean VERY) over-the-top car accident that I was taken out of the film for a bit. 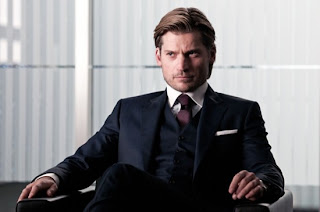 In some ways Roger is a bit of a superhero similar to those martial artists in the chopsocky films of yesteryear.  He can take a beating and plenty more, yet somehow he's able to get up and continue on, only to endure another round of brutality.  A mere mortal could never survive the hand he's dealt, but somehow his desire to over-compensate allows him to stand tall against his never-ending foe.

As the puzzle pieces fall together, every setup has a payoff that blends perfectly in the script by Lars Gudmestad and Ulf Ryberg.  As in The Girl with the Dragon Tattoo, it won't be long before the Hollywood machine finds a way to remake this Norwegian delight.