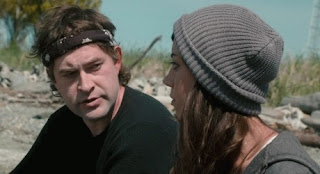 Safety Not Guaranteed
The Do-Deca-Pentathlon
by Mark Dispenza

The year 2012 is turning out to be the year of the Duplass brothers.  Following the successful red carpet rollout of Jeff, Who Lives at Home at SXSW in March, the brothers screened two more new films at the very same festival.

Safety Not Guaranteed was not actually made by brothers, Jay and Mark, but was produced by their company and stars Mark Duplass as the male lead. It is scheduled to be released in the USA on June 6, and the Do-Deca-Pentathlon, written and directed by the Duplass brothers, will be released two days later.

An actual want ad that appeared on the Internet was the inspiration for Safety Not Guaranteed:

Like many, writer Derek Connolly was intrigued and wondered what kind of story was behind it.  Was the man who placed the ad a kook or was something else going on?  He ran with the idea and wrote a comedy about three journalists who descend on a small town to find the man and expose the story, whatever it might be.

After spying for a while on Kenneth, played by Duplass, Darius Britt (Aubrey Plaza) decides to get closer by pretending to be a legitimate candidate for Kenneth's trip back in time. At first she finds him to be paranoid and secretive, but as she gets to know him better, she finds herself attracted to his passion and falls for him.  Realizing that her job and reputation may be on the line, she tries unsuccessfully to hide her growing affection for the man everyone else believes is a kook--everyone, that is, except the high tech company he was fired from and mysterious US Government agents who watch him closely. 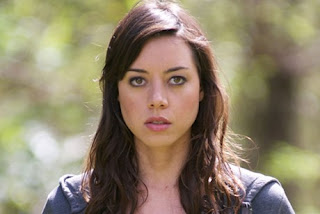 Although this sounds like the premise for a science fiction/action/adventure story, it has very little of those elements, which may be why Safety Not Guaranteed debuted to a mixed reaction from audiences at SXSW.  Some enjoyed the film while others left disappointed.  The story is actually a romantic comedy about casting aside the expectations of others and going for what really excites us in love.  If that kind of story appeals to you, you will probably put this film in your "plus" column.

The film works primarily thanks to Duplass and Plaza, whose charisma as actors and on-screen chemistry holds it all together.  Plaza, a cast member of the television series, Parks and Recreation, has a way of showing vulnerability and drive beneath a deadpan comedic style that inspires empathy from audiences and entertains them at the same time.

I found other elements of the film less than spectacular.  First-time feature helmer, Colin Trevorrow, was adequate if not somewhat less than inspired in his direction, and the story took off on tangents about the love lives of the supporting characters too often, taking the audience away from the story of Darius and Kenneth, who are the true heart and soul of the film.  Lost was the opportunity to explore their characters in greater depth, something that would have given audiences a more rewarding experience and resulted in a stronger film.

This is kind of a "cute" film, so I was surprised to learn recently that it was given an "R" rating.  Although I recall some, mostly suggested, sexual situations, and a bit of colorful language, my memory of the film is far more tame than the rating suggests.  It should be fine for most audiences.


The Do-Deca-Pentathlon was actually shot by the Duplass brothers after Baghead (2008), but was left in post-production limbo after their first big film, Cyrus, was greenlit.  Five years later, the brothers decided to finish it and get it out to audiences.  I'm on the fence about whether or not that was a good idea.

I say that not because it's a bad film, but because the brothers have come a long way since their struggling indie filmmaker microbudget days, and this film takes us back to that smaller, simpler time.  Coming so soon on the heels of bigger, star-powered Jeff, Who Lives at Home, arguably their best film to-date, Do-Deca may be too little too late for more recent fans of Cyrus and Jeff. 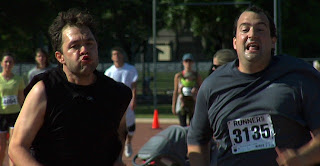 Like those two films, Do-Deca is about a dysfunctional family on a journey of reconciliation.  It's quirky and outlandish in places, but these maladjusted people are somehow familiar to us.  Maybe they're not so different after all.

The Duplass brothers based their script loosely on the true story of two brothers who competed fiercely with one another during childhood.  A series of competitive events that was supposed to prove once and for all who was the alpha dog of the pack was left uncompleted, with years of bad blood and regrets in the aftermath.  Years later the brothers come together at their mother's house and decide to redo the unfinished Do-Deca-Pentathlon, to the consternation of their mother and everyone else in the family.

The film stars Duplass brothers friend and frequent acting collaborator, Steve Zissis, who actually shines in this role to a greater extent than in any of his other performances I've seen.  Mark Kelly plays the brother who took a different path in life.

Posted by Mark Dispenza at 2:28 PM