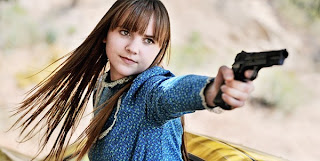 Bobcat in Your Face
by Mark Dispenza

Better known as the stand-up comic with the high-pitched voice, as well as actor and cast member of the Policy Academy films, Goldthwait moved into a new career phase as an indie writer/director with Sleeping Dogs Lie  in 2006.   Like that film God Bless America comes from the deep, dark, guilty thoughts that may cross our minds in a moment of weakness, but we'd never actually act on.  Goldthwait's protagonists do act on those thoughts.

Before I go any further, I have to warn you that you will be offended by this film. I don't mean you'll be offended if you're particularly sensitive or if you feel Goldthwait takes too many liberties exploring the dark recesses of the human mind.  I mean you will be offended - period - because that's what Goldthwait does.  He reaches into your psyche, grabs onto that terrible fantasy that crosses your mind on the rare occasion, and then he slaps you in the face with it in a humiliating, public way.

That experience is going to be a bit much for many people.  Frankly I found Sleeping Dogs Lie to be so offensive to my sensibilities, I never want to see it again.  While I felt he went too far in that case and I didn't get the relevance of it, I feel like he's getting his sea legs with God Bless America.  This latest film is a cornucopia of visual comedy and timely social commentary.  It was well-received by the audience at its SXSW US premiere.

Frank, played by Joel Murray, is an average, working class, lonely, divorced man who is beaten down by the pointless drudgery of his life.  He fantasizes about taking a gun and blowing away his rude, noisy neighbors and his obnoxious coworkers, but of course, he'd never actually act on those thoughts.  Then one day he is diagnosed with a terminal illness and he gets fired from his job.  His young daughter, who lives with his ex-wife and her new fiance in another city, tells him that she doesn't want to visit him anymore because he's boring and there's nothing to do at his home.

Frank turns on the television and watches a young man with no talent whatsoever be humiliated on the highly-rated American Superstarz, an American Idol-type talent show.  In complete despair he takes his gun and sticks it in his mouth, but before he pulls the trigger he sees another reality star on the screen.  Chloe (Maddie Hasson) is the spoiled, petulant teen star of her own reality series.  She's unbearably obnoxious and prone to go off on temper tantrums at the smallest inconvenience.  Realizing that she's the role model for his own spoiled daughter, Frank decides to perform a service and do away with her before taking his own life.

As he does the deed, he encounters Roxy, a high-strung 16-year-old classmate of Chloe's.  Roxy, played by Tara Lynne Barr, sticks to him like glue and convinces him to continue the work he started with Chloe, because there are a lot more obnoxious people out there who deserve to die.  From there the oddly matched Bonnie & Clyde embark on a road trip of murder and mayhem as they dispatch mean-spirited cable talk show hosts who spread fear to get ratings, reality show stars, and just plain rude people one after another. 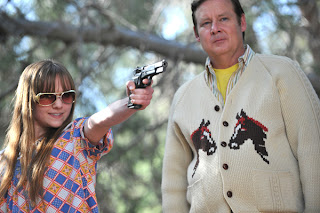 With her cute young girl style, bangs and pigtails, Barr perfectly encapsulates the YouTube generation of corrupted innocence.  While on the surface she's the modern teen who'll do anything for a rush, Roxy's awakening adult mind knows that there's something very wrong with the society she's forced to live in.  I'm sure we'll be seeing Barr in a lot more roles after this.

One of Goldthwait's strengths as a director is his ability to present the absurdity of society gone bad with effective, if not somewhat over-the-top, visuals.  In one early scene Frank discusses the previous night's episode of American Superstarz with a coworker.  Like the rest of his office mates, this one can talk about nothing else except the terrific entertainment provided by the episode's humiliation of a talent-deprived young man put on public display. 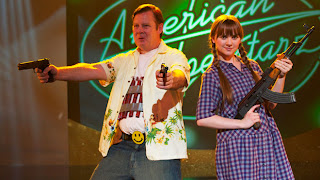 This is not a perfect film by any means.  Although Goldthwait the writer/director appears to be growing and getting better, the film's most glaring weakness is that he succumbs to the temptation of preaching to the audience.  The point he is trying to make is so clear from the story itself, that this tendency to stall the movie while we listen to Frank discourse about the "bread and circuses" decline of our society detracts from the experience.  I kept wanting to say, "Okay, okay, Bobcat, we get it.  Move on!"  I have to share with you what Indie Film Guru co-contributor, Zac, said when I told him I would be posting this film:  "I liked the concept, but ultimately it felt like a long speech over the course of 90 minutes."  That pretty much sums it up.

Despite it's weaknesses, I have to recommend this film for what's good about it.  It's offensive and funny at the same time, the visuals are smart, and the casting is perfect.  If you see this film and are rightly horrified, perhaps you'll think I need counseling, That may be, or perhaps in a world where the concepts of decency and good sense have been turned upside down, I'm on to something here.

Fortunately Goldthwait delivers the coup de gras in the climax of the film without excessive preaching.  After infiltrating the season finale of American Superstarz, Frank and Roxy realize where the fault truly lies for this whole mess, and they finally turn their guns on the right people.

God Bless America is currently playing in limited release, but is also available by Video on Demand.