Seeking a Friend For The End Of The World 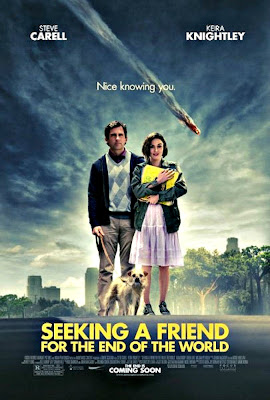 A DEEPER IMPACT
by Zac Sanford

Hollywood has a long running fascination with the "end of the world" scenario, and as the clock ticks closer to the end of the Mayan calendar, a slate of films has hit the multiplexes exclaiming the "end is near."  In Seeking a Friend For the End of the World, it isn't the CGI spectacle that drives the narrative, but the range of real emotions as the human race comes to its end.

And that end is just around the corner, three weeks to be exact, after an Armageddon-style mission to stop a doomsday asteroid fails.  The clock is now ticking and it is too much for many to take.  The first casualty is the marriage of Dodge (Steve Carell), as his wife bolts from the car, running into the night, never to be seen again.  And this is the central question within the movie - with only a finite amount of time before you cease to exist, what would you do?

Dodge takes the high road.   A man to never rest on his laurels, he still arrives to work daily, but won't take the newly vacated CFO position.  He fills the 9 to 5 by answering calls at his insurance job, exclaiming that the pending disaster would not be covered under one's policy.  But why go to work?  To some, the normalcy is a way to keep your mind at a distance from the bleak future that is right around the corner.  Or maybe as best exemplified by Dodge's housekeeper, there may be a bit of faith buried under the surface that things might not go as expected, or there's something better awaiting in the afterlife. 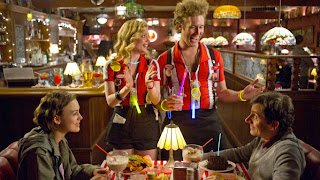 While the themes of the future and what could or couldn't happen aren't really explored within the context of the film, most of the characters Dodge comes across in the first act have a chance to live out every fantasy.  There really aren't any repercussions when the end is near.  Dodge's best, and it seems only friend, Warren (Rob Corddry), wants to make the best out of his last few days.  It's time to smoke those Cubans and to teach his children to "drink through the burn" as they take their first alcoholic drinks.  It is the party to end all parties; girls will sleep with any man, including one of Patton Oswalt's stature, and since there's no time to worry about getting addicted, why not enjoy the heroin that someone brought to the party.

But Dodge doesn't want to try new things.  He is a man who has lived a life of regrets, most notably letting the first love of his life get away from him.  When he comes across a letter that has been in the possession of his neighbor, Penny (Keira Knightley), for an unknown amount of time, he makes it his mission to find a way to reunite with her one last time.  Penny also has a life of regret.  Instead of heading out on one of the last flights to be with her family in the UK, she decided to stay with her boyfriend (Adam Brody).  When Penny gets in a final fight with her boyfriend, only Dodge is there to console her and says he can get her to a plane if she can drive him to find his lost love.

And that's when the movie shifts gears a little.  Sure there's a couple more episodic bouts with doomsday preppers and overzealous cops, but the real heart in the story is trying to find that human bond and connection within a time of chaos. Lorene Scafaria, who previously wrote Nick and Norah'sInfinite Playlist, penned the script and is behind the camera for the first time.  She perfectly maneuvers the change from an over-the-top comedy into a dramedy, and as the movie gets closer to the final moments before impact, the film goes into longer stretches without a comedic beat. 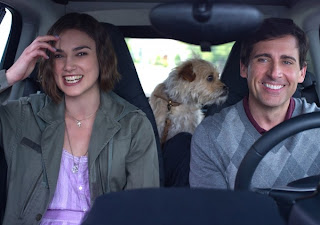 The road trip aspects allow a real chemistry to be built between Carell and Knightley, considering so much screen time is filled with the two.  Keira does a great job playing against type, while Steve doesn't bring too much new to the table.  We've seen him play the affable guy who is a little down trodden.  But somehow the bond is quickly built and believable between the two.  And like any good rom-com, you hope and root that they'll end up together, but is the end of the world enough to send them in opposite directions?  Or will they ultimately spend the last remaining seconds together, true friends in the end?

Seeking a Friend For the End of the World is a fun twist on the doomsday scenario. What it lacks in special effects in makes up in heart, hopefully making this a memorable film in the end.

Email ThisBlogThis!Share to TwitterShare to FacebookShare to Pinterest
Labels: End of the World, Fox Searchlight, Keira Knightley, Lorna Scafaria, Mayans, Seeking a Friend for the End of the World, Steve Carell