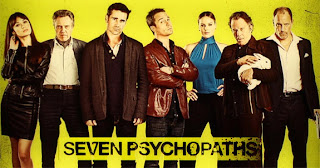 If you take a heaping dose of Quentin Tarantino and blend it with the brilliance of Charlie Kaufman, you will barely scratch the surface of Martin McDonagh's sophomore effort, Seven Psychopaths, a meta-filled buddy comedy that mixes equal parts action and dark comedy.

Just like his previous film, the slightly superior In Bruges, Colin Farrell is back as the main character. This time around he's an Irish transplant smack-dab in the middle of LA. He previously had a little success, but now he has one hell of a writer's block. I, too, if I delivered a powerful film like In Bruges in my first effort out, would be afraid of how I'd be able to top it on a creative and critical level. And Farrell's Marty must be a small part of McDonagh considering he's even been named Marty in the movie. 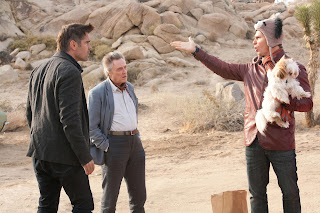 If this sounds like a familiar setup, you may be right. Kaufman previously tackled the matter of creative block with such high marks in Adaptation, that it seems McDonagh may have borrowed a page from his playbook... but that isn't necessarily a bad thing. While Adaptation was filled with winks and nudges about Kaufman (along with his fictitious brother, Donald), Psychopaths doesn't fill itself with real insiders and past experiences to fully say "this was my struggle."

In the movie, Marty confides in his pal, Billy (played brilliantly by Sam Rockwell), that he hasn't been able to get any further than the title Seven Psychopaths, and a small character bio for the first of the seven psychopaths, but nothing more. Both agree, along with all the Hollywood big wigs, that it is a killer title. But that is all it is.

Sam pressures Marty into letting him help out with the story, and maybe they can share a little screen credit in the end. See, Billy has a bit of crazy side himself, including a small side business where he kidnaps dogs from the local park and returns them for the reward money. And people in LA must love their dogs because I don't see how else he survives in this overpriced metro, especially when splitting the reward money with Hans (Christopher Walken).

On his latest expedition to the park, Billy steals a Shih Tzu, not realizing the can of worms that he just opened. The owner of the dog is a bad-ass that you wouldn't want to cross. Charlie (Woody Harrelson) is unhinged and another one of the aforementioned seven psychopaths. He'll kill anyone that gets in the way of reuniting with the one he loves, as long as his gun doesn't jam up. You would think a skilled madman would spend a little extra on the artillery, but maybe all his extra cash is spent keeping his dog in gourmet meat. We'll never know. 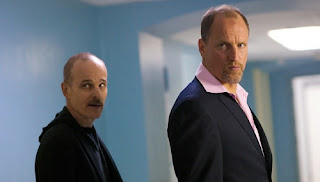 While the script plays a bit episodic as each of the psychopaths are introduced into the story, the plot takes a back story to the dog-napping, which is a good thing, as films solely about the industry are typically dull and boring for those outside of the thirty-mile zone. If I can make one little complaint, it's that the film could have used one or two fewer "psychos," allowing the story to fully embrace and flesh out the characters a little more. Martin was able to handle the two-hander perfectly while writing In Bruges, but the extra psychos feel stretched a little too thin in the end.

The snappy dialogue and frantic pace reminds me of early Tarantino, where the characters would have some of the most asinine conversations while dealing with life and death situations, and Martin, being a playwright, perfectly handles the back and forth between all parties involved. As each of the psychos gets closer to our main characters, the tension builds into a climactic and somewhat forced third act resolution. When the blood has been shed, only then can Marty find his story. Hopefully McDonagh will continue telling stories on the big screen.

Posted with Blogsy
Posted by Zoey Rose at 7:01 AM