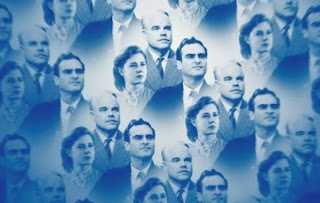 I Want to Believe
by Mark Dispenza

The Master is not, as you may have heard, a thinly-veiled history of the Church of Scientology.  It is an incredibly well-crafted and thought-provoking film about the human drive to believe that our importance as individuals is based on something larger and greater.

Writer-director Paul Thomas Anderson is a genius.  His major films, such as There Will Be Blood and Magnolia, come years apart and reflect the kind of attention to detail that can only be accomplished by long-term, conscientious work.  In other words Anderson goes deep.  He takes on the big questions of humanity and brings them down to the micro level of individual characters--small stories with big meaning.

In The Master, Anderson follows one lost individual's search for meaning.  Freddie, played by Joaquin Phoenix in what well may be his best role ever, is a returning veteran of World War II.  Although the film doesn't spend much time on his war experience, it's understood from the opening sequence that it had a profound effect on him.  Now he suffers from alcohol addiction, drifts aimlessly and is subject to bouts of both open and passive-aggressive anger.  He is, as Lancaster Dodd later asserts in his characteristically direct style, "a scoundrel." 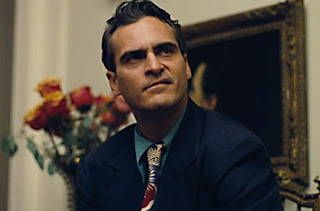 That makes him the challenge that Dodd, played by Philip Seymour Hoffman, has been waiting for.  Dodd believes that he has found the answers to all of life's questions, and it all boils down to an age-old battle between cosmic players who currently occupy the bodies of the human race.  He calls his philosophy, or religious cult as it may be, the Cause.  By the time he comes across Freddie, he has already amassed a considerable following from people who address him as "the Master."  If Dodd can turn around Freddie's life, it will prove, once and for all, the validity of his concepts.  In return Dodd expects Freddie's complete loyalty and devotion.

At first Freddie goes along because Dodd is providing for his physical needs.  Being unemployed and without prospect, that's important for his survival.  Over time he begins to drink the Kool-Aid and gives Dodd the devotion he demands, even to the point of physically assaulting Dodd's enemies.  As he comes into contact with other individuals, including those who belong to Dodd's entourage, he begins to question the validity of the Cause.  He starts to see Dodd, not as a savior, but as a fallible human being who seems to be "making it up as he goes along."  Freddie pulls away from his mentor and begins to seek a life on his own again.

Amy Adams is brilliant as Dodd's young wife.  In public she is his devoted spouse and deals harshly with dissenters.  In private she is not so deferential.  She understands that he is nothing but a man, weak and fallible, but she is able to create for herself a considerable amount of control--over both Dodd and the followers of the Cause.  When Dodd shows ordinary human weakness, she comes down on him and chastises him soundly, but only in private.  One must keep up appearances. 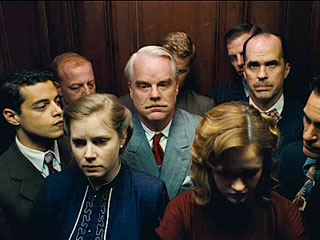 The interesting thing is that Dodd may not really have the answers to the big questions, but he does help Freddie and gives him the support he needs to get on his feet and eventually seek his own path, whether Dodd approves of it or not.

Once when I was a college student, over-confident of my intellectual acuity, I attacked someone's beliefs during the course of an otherwise friendly conversation.  I no longer recall the exact substance of our discourse, but it involved politics or religion--one of those subjects that brings out the fire and passion in people and the wise admonish us to avoid in polite conversation.

My superior debating skills prevailed, and I will never forget how emotionally distressed and helpless my opponent looked by the time I finished with him.  My smug satisfaction with intellectual victory lasted all of two seconds before my empathy prevailed.  It was obvious that I had cut the person's lifeline and left him adrift in a dangerous current.  I no longer felt intellectually superior.  I felt like a bully.  It was the last time I tried to dissuade someone from a closely-held belief by direct confrontation.

Later as I mulled the incident over in my mind, I confessed my deed to a friend.  I expressed out loud what I was thinking.  I said that I shouldn't have done it.  She asked, "then why did you do it?"  It was at that point that I realized my attack was based on my own insecurities, and not on the beliefs of another, however tenuous they may actually be.

Perhaps we are all Freddie, and it's the seeking that truly has meaning.  It doesn't really matter where we find our answers, as long as they are valid for us.

Posted by Mark Dispenza at 6:36 PM