Dreams of Self-Discovery
by Zac Ryan

A luckless stand-up comic finds success after he confronts his inner demons in the entertaining Sleepwalk with Me.

Aspiring stand-up comic, Matt Pandamiglio (Mike Birbiglia), is at a crossroads in his life.  Instead of  landing the prime slots at the local comedy club, he watches from afar as he serves beverages to the paying crowd and unappreciative comedians after their set.  He recently moved into an apartment with Abby (Lauren Ambrose), his girlfriend of eight years to whom he's yet to pop the question.  It isn't that he's afraid of commitment, but that he's waiting for the moment "when nothing else good can happen in his life."  As pressure comes from all sides to settle down, Mike's rare REM Behavior Disorder rears its ugly head.

When he's not sleepwalking through his ho-hum life, he's running from jackals and any other creatures that decide to chase him in his sleep.  While most humans will lay quietly in their bed, Matt reacts physically in the real world to the dream he's having.  So to take care of the jackal problem, he kicks a garbage can in the corner into submission, not realizing the real life implications of his actions.  Thankfully something of this sort isn't so dangerous, but as Matt ventures out on the road and the pressure mounts, the serious nature and consequences of his dreams builds to life-threatening levels. 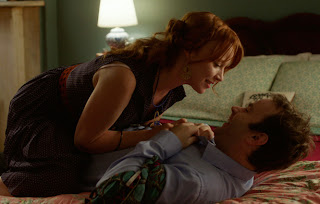 Mike Birbiglia's script (co-written with Ira Glass, Joe Birbiglia and Seth Barrish) is adapted from his successful off-Broadway one-man show and book of the same title.  When Mike made an appearance on NPR's This American Life, his tale of sleepwalking quickly became one of the show's top episodes.  It isn't that the story is particularly funny, but how Birbigilia comes across as a likable everyman.  And for the most part, as his character Matt, he comes across likable on screen.  Even when he speaks directly into the camera and forewarns the audience, "Remember, you're supposed to be on my side," before delving into one of his darker character moments.

But most of all it works. Even when he is manipulative and hiding the truth, you want to sit back and root for him to succeed.  You were privy to his early beginnings as a stand-up-slash-bartender, where the limited amount of stage time led to long bouts of uncomfortable silence, not only from the crowd on screen, but the audience in the theater.  It is Matt's passion to succeed, to show his girlfriend and his over-bearing parents (Carol Kane and James Rebhorn ) that he has the chops to make it.  Once he lucks out with an agent (Sondra James), not necessarily because he's funny, but because he has a car and willing to take under-paying gigs, he hits the road to get to that next step of fame. 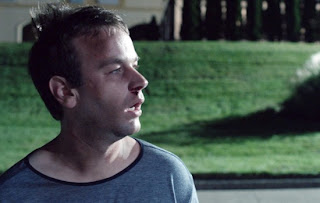 While the money isn't great, the hotels aren't five-star worthy, and he's bombing every night, Matt is happy, or at least he appears to be on the outside.  One night after a horrific set, he confides in fellow comic Marc Maron about his relationship, his unhappiness, and finally, the true comedic side comes out.   Marc tells him that the honesty of his life is better than any of the other hack material in his stage act. So Matt runs with it.  As he gets more comfortable on stage, the laughs come fast and furious, but so do the dreams.

Co-directed with Seth Barrish, the dreams sequences and pace continue building until the final big dream sends all Matt's worked for into flux.  The constant rising action of the dreams, Matt's career and home life come crashing down in a jaw-dropping third act change that hopefully hasn't been ruined by other viewers or the NPR episode.  When it happens there was an audible gasp in the theater, but knowing what was done and the man who wrote the script is on the screen in front of you, there is no doubt that he will survive.  But he comes out of the situation a changed man.  He's grown thanks to his dreams, his aspirations and finally free to be himself.

While some of the early stand-up can be cringe-worthy, the film is chock full of laughs up until the third act.  The film is sure to be an instant crowd-pleaser, and hopefully turn many fans onto the hilarious stand-up of Mike Birbiglia.