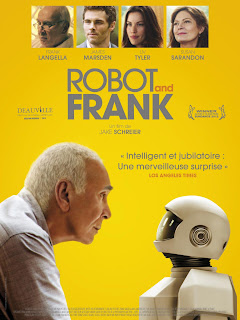 
An award caliber performance by Frank Langella makes Robot & Frank one of the fall's first must-see films. His character choices as Frank are nuanced, sending him from on-set dementia to finding the passion he once had, leaving him little to play off against but the Robot (voiced by Peter Sarsgaard).

Set in the not-so-distant future, Robot & Frank is more character-driven drama than Sci-Fi spectacle.  If it wasn't for the futuristic bits of technology smattered about, this film could have taken place in the present day.  Cell phones and home tech are more about the visual and less about the message.  The library is undergoing a renovation as the need for printed books is going the way of the compact disc and DVD.  Frank is an old man living in a new digital world. 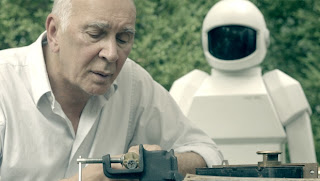 And within the world, Frank refuses to accept the changes around him.  Maybe he isn't adapting to change, but it is happening so rapidly around him that his fragile memory seems incapable of keeping up.  Frank wanders into shops and restaurants looking for what was once there.  Instead he's ushered out, but not before he can slip a keepsake within his bag.   You see, Frank was once a small-time crook, so maybe his mind isn't slipping as much as others believe.

His son, James Marsden, is tired of helping his father out of binds with the ever increasing memory lapses.  Like any good son he wants the best for his father in his old age, so he brings a Robot into his life.  Frank relents but refuses to to play along.  The Robot is there for his well being and will do anything to make sure Frank's life is a pleasant one to the end.  He cooks Frank a breakfast of organic foods to help with his health.  Plus he wants to keep Frank busy, taking him on walks as a "busy brain helps make a healthy mind." 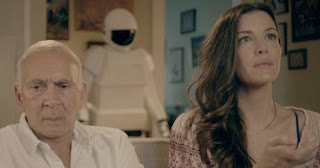 Once Frank realizes he is able to use the Robot's razor-thin programming to his advantage, he decides to get back into the game.  If he's going to be active, it won't be walking along the hills on the outskirts of town. Instead he will use the Robot as his eyes, ears and lock-picking cohort.  Together they will create the ultimate bond of friendship between man and machine.

But it isn't just all robberies and getting Frank back on the health-kick.  Frank is lonely, and he sees his one passion for books coming to an end.  At a party for the rich and snooty, Frank brings the Robot to the re-imagining of the library, where we see that even the Robot is an advanced line of technology, as the out-dated robot at the library is soon to be devoid of any use.  There's multiple layers at work in the script by Christopher D. Ford.  Besides the caper and the memory lapse, Frank's other child, played by Liv Tyler, is at the opposite spectrum to his son.  She's always off in some other country trying to bring forth a better society.  She's even against the Robot aid and will do anything to stop it. 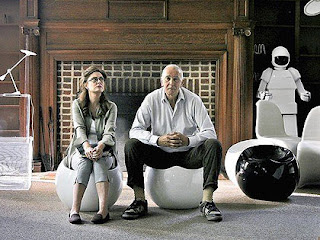 But the scenes that shine through the most are those with Frank and the Robot playing off one another.  It's a buddy comedy set against the back drop of what could be a very bleak existence for Frank.  Frank won't go quietly, and his performance should easily shine through come award season if the film doesn't get lost in the shuffle of heavy hitters later in the year.

Robot & Frank, directed by first-timer Jake Schreier, is meticulously crafted, never devolving into the melodramatic.  He brings an interesting twist to a tired formula of a character slowly slipping into the mental void.  You can only hope that Frank succeeds against the wealthy, robbing from the rich, even if he doesn't give it to the poor.  There may not be many chances left for Langella to win the golden statue, but this may be his best yet.