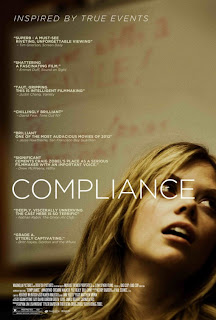 The Power of Authority
by Zac Sanford

Compliance is a terrifying tale, although not a horror film, that delves deep into the human psyche and how far someone will go when provoked by authority figures.  Not all too dissimilar from the Milgram Experiment of the 1960's, the film is based on actual events that took place at a McDonalds in Kentucky that pushed events so far down the rabbit hole that one victim was humiliated and sexually assaulted.  The power to please authority figures and the hierarchy of power is explored in great detail.

In the quiet suburban town in which the film is set, with the names and locations changed, Chick-Wich manager Sandra (Ann Dowd) is already starting her day off on the wrong foot.  The night before an employee left a freezer open, spoiling $12,000 in goods.  On top of it all, someone from corporate may be swinging by later to do a store inspection on what is usually one of the busiest days.  In the morning staff meeting, accusations are made and the idea of the pending visit sets forth the power struggle that is prevalent through the film. 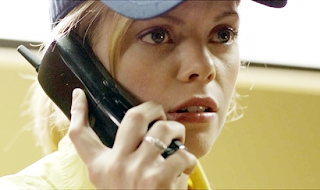 During the early morning rush, Sandra is pulled away to take a phone call from Officer Daniels (Pat Healy).  He states that he has a woman with him that claims one of the employees stole something from her purse, so he needs Sandra to pull the offending employee aside.  He doesn't throw a name, but she quickly throws the younger, and troublesome Becky (Dreama Walker) under the bus by name, giving the officer all the ammo he needs to pull his sham.  And what unfolds is truly disturbing, disgusting, and will leave many viewers questioning Sandra's actions and compliance to the officer on the phone.

Healy is pulling a prank, claiming to be an officer of the law, to see how far he can push Sandra.  Sandra complies and pulls Becky into the stock room in the back.  Locked away from the customers and the other employees, Daniels claims he has her supervisor on the other line, and with the crime caught and seen on the security cameras, she follows his every command.  She digs through Becky's belongings, and when the loot isn't uncovered, she is told to strip search Becky.  This would be a red-flag to most people that things are going too far, and the start of the unraveling.  Sandra believes the authority, and Daniels always has an answer any time she questions him. 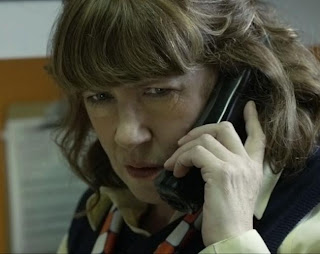 When Sandra feels things are going a little further than she feels comfortable with, considering there's a naked subordinate under her control, Daniels has her pull in other employees, hoping to push the crime even further.  The minimum wage employee that she pulls back is one of the few that questions the actions and authority, but for some reason he doesn't act on it, pulling Sandra back into the situation.  Sandra doesn't have time for this, considering it is the busiest time in the restaurant, so Daniels asks if there's anyone else who can watch over Becky.  Sandra calls in her fiance, who takes the situation to such extreme levels that it will make viewers squirm in their seat and want to yell at the screen.

But the officer always has an answer for those who question his authority.  Why isn't he there?  How much longer will it be?  How much further will they have to go in this ordeal?  In the Milgram Experiment, the test subjects were forced to shock someone on the other side of the wall whenever they answered a question incorrectly.  The subjects would hear pain and suffering on the other side, but they still would comply with the authority figure.  What is within the human mind that allows someone to suffer the power of authority?  That experiment and this movie don't really answer the question.  Instead we are shown their pain and anguish as they see (or hear) obvious human suffering.  Most would rather someone else suffer than have the strong-arm of the law come crashing down on them.

Craig Zobel's script plays out in a taut 90 minutes, with constant escalating events and depravity.  Some may call this torture porn, not in the physical sense (even if it does go there in some ways), but more on the emotional level.  His camera is in close, capturing the excruciating pain as characters must choose between being compliant and questioning their own morality.  Dowd plays the perfect manager, caught in the middle of what's right and wrong, constantly searching her own emotions and doing what may or may not be right.  Dreama Walker, most recently known for her light-hearted turn in the TV series,The B---- in Apartment 23, plays the opposite spectrum of her television character.  She's naked, or barely covered in an apron for a good part of the movie, and emotionally raw, as she has no way to counteract her superiors. 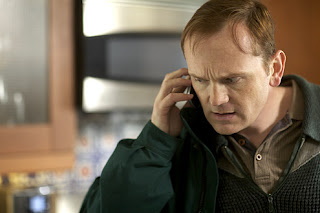 Healy perfectly pulls off the mastermind behind the operation.  He's not a witness to the crime taking place, instead he's at his own distance, garnering some sort of joy through the voices on the other end of the line.  He's not sexually aroused, or at least he's not playing it that way.  There's no heavy breathing or signs of satisfaction in his game.  He's calm, cool and collected.

The film, which premiered at the 2012 Sundance Film Festival, was marred with claims of exploitation and has had several walk-outs in screenings across the country.  All one has to do is  to question authority and things would not go as far as they do, but no one does until the situation has hit its peak.  Why, as humans, are we such sheep.  While you might be sitting back in your chair questioning the actions unfolding on screen, would you do anything different in their situation playing out in real time?  There's no way to know

Just like Mark's review for Killer Joe, this is a film that will divide audiences.  Not in the same dark comedic sense, but mainly by those who feel they are smarter than those in this film.  The walk outs and the vocal response during screenings has been harsh and critical, but as the film claims over the closing credits, similar crimes have been committed over seventy times over the course of a decade.  It may make you weep for humanity, not just those who pull the sick prank, but those who comply.  In the end, just like with the Occupy movement, maybe Compliance will lead to a deeper discussion of the power of authority and how much control it should have.

The film is currently playing in limited release and available on VOD.