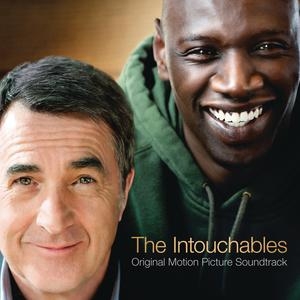 In a world bombarded with news of ethnic hatred and violence, The Intouchables is a welcome respite that offers hope.

Based on a true story from which the French writer-director team of Olivier Nakache and Eric Toledano have taken some obvious liberties, The Intouchables is nonetheless a crowd-pleaser that is guaranteed to warm the hearts of all but the most cynical.

Philippe, played by Francois Cluzet, has been rendered a quadriplegic following a hang gliding accident.  While he has begun to come to terms with and accept his condition, he is less than pleased with a succession of caregivers who insist on treating him like a helpless child.  Philippe may be paralyzed, but he's not done living yet.

Enter Driss, played flamboyantly by Omar Sy, an African immigrant.  The only reason Driss shows up to apply for the job is to get turned down yet again, so he can continue to qualify for public assistance.  He has failed so many times in winning over potential employers that now he assumes the task is impossible.  Play the system and survive another day.  That's his mantra.  Driss no longer goes to employment interviews on his best behavior.  He behaves as outlandishly as possible, so he can get turned down quickly and be on his way.

But it's that very irreverence that attracts Philippe, and against the better judgement of his household staff, he makes the unlikely hire.  Philippe comes from a world of wealth and privilege.  Driss comes from poverty and struggle.  As the story unfolds each learns about the world of the other, and a lasting bond of friendship develops beyond the employer-employee dynamic. 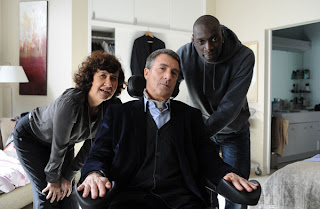 The story is in many ways predictable and sometimes a bit over the top, but it's hard not to get caught up in the film's feel-good aura.  In a time when the headlines around the world make it seem that tolerance and understanding are a lost art, The Intouchables gives us a small, human-scale relationship that is not without conflict, but ultimately surmounts all obstacles and thrives. 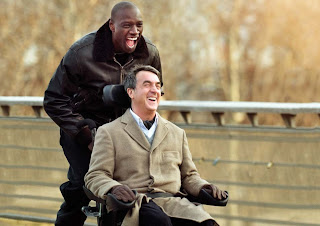 There's not a lot to say about the story, as it's simple and has obvious mass appeal, especially judging from its worldwide box office so far.  The reason the film works so well despite it's predictability is that it is very well made.  The cinematography is beautiful, the acting is first-rate and the directors' story-telling choices are good ones.  There is a rumor that it will be remade in the US.  I'm not surprised.

The Intouchables is currently in release in the US - in French with English subtitles.