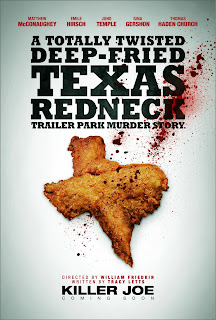 Freaky Friedkin is at it again in a darkly comic, perverse and sickly entertaining romp through the underbelly of Texas.

Adapted by Tracy Letts from his own off-Broadway play, Killer Joe is his follow-up feature with director William Friedkin after teaming on Bug in 2006.  Friedkin has never been one to shy away from edgy material, as he so aptly proved with his early films, The French Connection and The Exorcist.  If anything age has made him even bolder.

Killer Joe is billed as "a totally twisted, deep-fried, Texas redneck, trailer park murder story," and all of that is true, although it doesn't even begin to describe how deeply the story delves into the underside of humanity.  There are absolutely no redeeming characters here.  These people are marginal, undisciplined, self-centered, incestuous and basically "dumb as a doorknob," except for "Killer Joe," played by Matthew McConaughey, who brings a base level of street smarts and predatory cunning into the mix. 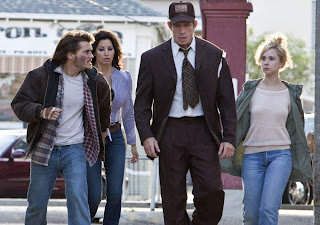 A family of trailer park Texas rednecks learns that there is a sizable life insurance policy on their mother and ex-wife of father, Ansel (Thomas Haden Church).  Egged on by son, Chris (Emile Hirsch), the two team up with Ansel's new wife, Sharla (Gina Gershon), to devise a plan to murder the despised woman and get access to the life insurance proceeds.  They hire a dirty cop, the afore-mentioned Killer Joe, to carry out the hit.

Of course, when Joe delivers his end of the bargain, the family discover that, being enormously stupid to begin with, they have really screwed up the whole scenario and can't come up with the money to pay him. Joe gives them a deadline to deliver, or in lieu of killing them all, he will take beautiful daughter, Dottie (Juno Temple) as payment.

Zac and I both saw this film at festival screenings prior to this week's wide release, and being the sensible lad he is, Zac hated it with a passion.  God strike me dead with a well-aimed thunderbolt, I can't honestly agree. This is low-brow entertainment executed as high art.  It worked for me and I laughed throughout.  I don't know what twisted place in his tortured soul compelled Letts to write this story or Friedkin to direct it, but they teamed up with an exceptional cast to pull it off flawlessly. 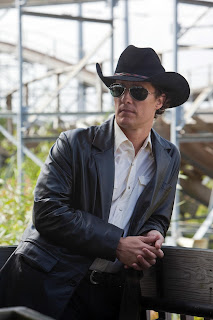 Friedkin was engaged in an ultimately unsuccessful fight to reduce the film's NC-17 rating, and that helped delay the release date.  That rating was likely inspired by an infamous scene involving Sharla and a somewhat violent sexual act with a fried chicken drumstick.  Gershon will probably win some kind of award for that scene, but trust me, it won't be an Oscar.

If you see this film and find it offensive, please don't complain to me.  The disclaimers are all over the place, both in this post and on the film's own poster and advertising.  On the other hand, if you find some measure of amusement in the bumbling foibles of humanity, you're going to be in for a treat.

Posted by Mark Dispenza at 7:53 AM