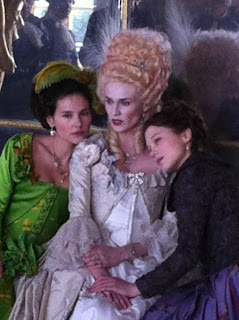 Seduced by Power
by Mark Dispenza

The seductive, yet illusive nature of power is at the heart of Benoit Jacquot's historical drama about the first days of the French Revolution.  Farewell, My Queen chronicles those events through the eyes of Sidonie Laborde, the fictional reader to Marie Antoinette.

The story begins with business as usual in the queen's court at the Palace of Versailles.   It is an opulent life for French royals, with hundreds of servants at their beck and call.  With so much wealth at their disposal, most of their concerns are trivial and centered on the juiciest of gossip about their contemporaries.  But a dark cloud soon descends, as news of the storming of the Bastille reaches Versailles and the royals begin to realize that their days are numbered, especially when a pamphlet listing many of them on a revolutionary death list is circulated.

Jacquot cleverly avoids showing scenes outside the walls of Versailles, so that the audience viewpoint is the same as that of the characters. The palace becomes permeated with a sense of impending doom.  They don't really know what is going on or how dire their situation is, and news of the outside world quickly becomes a commodity of trade.

Sidonie is played with just the right mix of naive superiority, self-absorption and vulnerability by Lea Seydoux. Her youthful beauty and charm are strengths that give her access to men in the know, and with that knowledge she does her best to boost her profile in the eyes of the queen, for Sidonie has become obsessed with pleasing Marie Antoinette, and her self-image now depends on the queen's approval. 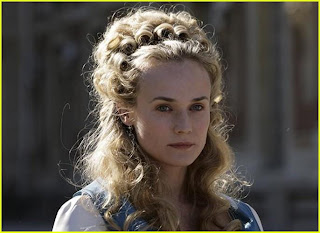 What sets this film apart, other than the beauty of its elaborate production design, is its characterization of the queen herself.  Marie Antoinette is often depicted in film as a caricature, in keeping with the image of her that was promulgated by the victors following the revolution.

The Marie Antoinette played brilliantly by Diane Kruger is both captivating and complex.  She may be somewhat of a diva, certain of her special place above all other people, but she is also human, skilled in many ways, bolstered by cunning charm, vulnerable and filled with longing for what she cannot have - particularly the love of the Duchess Gabrielle de Polignac (Virginie Ledoyen), whose favor with the queen ultimately became a liability that helped fan the fires of revolution and lead to the queen's demise.

It is easy to see how Sidonie could become a willing participant in her own seduction, infused with the desire to believe that she is special and unique in the eyes of someone so beautiful, privileged and powerful.  Of course, she is doomed to be disappointed.  Her value lies more in what she can do for the queen in the moment, and not from her own special qualities.

That lesson is foreshadowed after one of the queen's highest ranking servants is dismissed for stealing from her, something many in the court did when they realized the end would soon be upon them.  Sidonie had often seen the woman engaged in banter with the queen's head servant, Mme. Campan (Noemie Lvovsky).  Sidonie tells Mme. Campan that she is sorry about the loss of her friend.  The woman looks at her in honest surprise and tells her "I have no friends at Versailles." 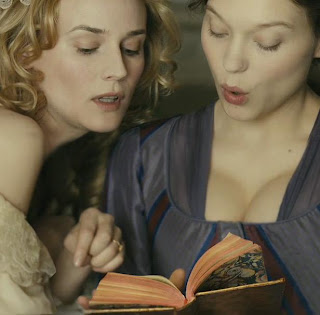 Farewell, My Queen is bolstered by elaborate and beautiful costuming and production design and a mesmerizing cast.  In French with English subtitles, it is currently in limited release in the USA.

Posted by Mark Dispenza at 9:43 AM