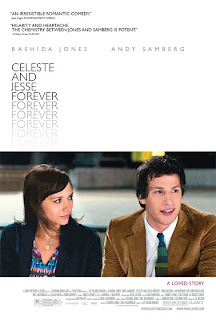 Beginning at the End
by Zac Sanford

Everyone has met a couple like Celeste and Jesse at some point in their life.  They're the pair that is lovey-dovey in public, never seems to fight, have jokes that are so inside that not even their closest friends get what the punchline is, and they are destined to be together forever.  Deep down, they're best friends at heart.

Problem is, while they're still BFFs for life, they've decided to call it quits six years into their marriage. Well, it wasn't completely mutual.  Celeste (Rashida Jones) has skyrocketed past her other half in all aspects of life.  She works in the world of trend spotting, has a book released on the subject and appears on the type of pop culture shows that populate E!.  Jesse (Andy Samberg) is content living in a small bungalow working on his art, that is, when he's not too busy rewatching DVR'd clips of the 2008 Summer Olympics.  She's ready to move on in life, yet he's content with his current place. 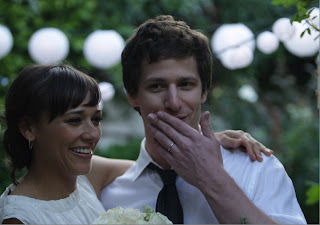 At the encouragement of some friends, Jesse decides to dive back into the dating game in Los Angeles.  He's reluctant at first, as he still harbors feelings for Celeste. But with her blessing, and her own pushing, he finally gets the nerve to ask someone out on a first date.  When Celeste finds out that the date has stayed over, as Jesse stays in the guest bungalow behind the house, she too must make the plunge.  While the dating lifestyle comes easy to Jesse, things are on the opposite side of the spectrum for Celeste.  In short, men are weird, and no one seems to ever come close to what she once had.

Samberg feels comfortable in a role that tears away the overly comedic style that he's used to in his weekly Saturday Night Live stint.  This is the perfect first step in his post-SNL career and will let him branch out from his current man-child roles.  But it is Jones who shines above all else.  Usually relegated to smaller roles in ensemble casts, the Parks and Recreation star radiates on-screen.  And since Hollywood seems to lack strong roles for smart females, it only makes sense that she co-wrote this script with fellow real-life friend, Will McCormmack, to give herself the opportunity to shine. 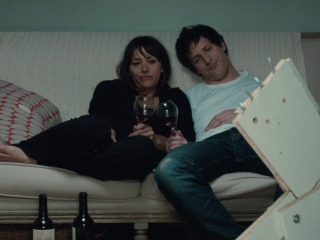 In a world of cliched romantic comedies, Celeste and Jesse breaks the monotony that we've come to expect of Hollywood.  A lot of the tropes are still there, but the title might be misleading if you expect everything to be wrapped up neatly for all.  Lee Toland Krieger's direction feels like a love-letter to Los Angeles, and some of the inside jokes may be lost on those outside of the thirty-mile zone.

My only complaint is about the razor-thin supporting characters played by Elijah Wood, a gay coworker, and the pompous Lady Gaga-esque client to Celeste played by Emma Roberts.  Neither actor is given much to work with.  Instead they seem to pop in at the right moment to bring the laughter back into the mix.  Minus the small complaints, Celeste and Jesse Forever is a great alternative to the tired Hollywood formula.