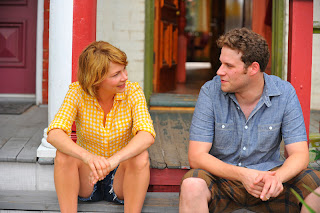 Lead Us Not into Temptation
by Mark Dispenza

Sarah Polley is building a career out of making exceptional films based on the emotional trauma of ordinary people.

After a successful run as a film and television actress during the '80s and '90s, Polley left the profession to be a political activist, but returned to the industry as a writer-director during the past decade.  Her talents were much in evidence in Away from Her, for which she was Oscar-nominated for Best Adapted Screenplay.  The multiple award-winning feature showcased actress Julie Christie, winning her acclaim for her portrayal of a woman losing her past to the ravages of Alzheimer's.  As someone who has had to deal with that issue in my own family, I thought the film was the most insightful depiction of that all-too-common emotional trial that I have ever seen.

Polley's follow-up feature is a smart and sensitive portrayal of a marriage during that risky time when husbands and wives fall into familiar patterns and take the wants and needs of the other for granted.  As in many marriages the real cause of this one's demise is rooted in failures of communication and listening.

Michelle Williams is Margot, a young woman in a five-year marriage to Lou, played by Seth Rogen in a rare non-comedic role.  He is a loving husband who adores his wife but assumes he knows everything there is to know about her.  The tragedy is that Margot also loves Lou deeply, but he is not satisfying her growing desire for a more adventurous sex life, and he is oblivious to the signals she's giving him.

Margot's desire is ignited the day that Daniel (Luke Kirby) walks into her life.  Daniel is handsome, fit, and articulate about his attraction to Margot in a way that Lou is not.  Much of the film is centered around the push-pull relationship between Margot and Daniel.  She tries to resist his spell, but over time she allows her ability to control her impulses to deteriorate.  She knows she shouldn't go to that place if she wants to preserve her marriage, but she can't stay away from the flame.  She allows her desires to dictate her behavior.  Tragically, Margot will learn that important lesson: no matter where you go, there you are. 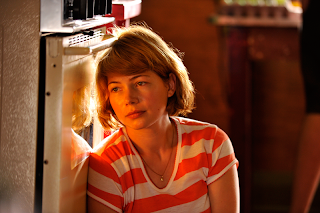 The thing that sets Williams apart as an actress and consummate professional is that she never "phones it in."  In Blue Valentine, for which she received a Best Actress nomination at the 2011 Oscars, Williams played a similar role as a young woman facing the imminent collapse of her marriage.  Yet there is absolutely no trace of that character here.

Williams has created someone completely new, with her own unique aspirations and shortcomings.  This is an entirely different woman, right down to her clothing and hairstyle.  If they weren't aware going in, I doubt that many who saw both films recognized the same actress in the lead role.    If you see Take this Waltz for no other reason, see it for Williams' performance. 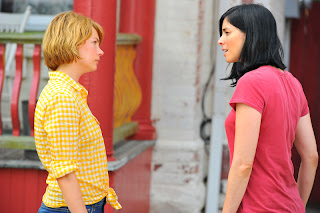 
Take this Waltz is very much a character-driven film and a showcase of acting talent.  Polley uses actors who are best known as comedians and pulls performances from them that are career-defining.  Even more remarkable than Rogen, who has starred in several of the top-grossing comedies of recent years, is Sarah Silverman,  Her dramatic turn as Geraldine, Margot's best friend, must be seen to be believed.  Silverman is spot-on convincing as a woman who suffers from the demonic pull of alcoholism, putting her relationship with her loving husband and children at constant risk.

It will be a terrible oversight if Take this Waltz is not nominated for the top film awards this winter.  And if there are more similarly remarkable films from writer-directors like Polley, 2013 will be another "year of the woman," and thankfully, that phrase will begin to lose its meaning in Hollywood.