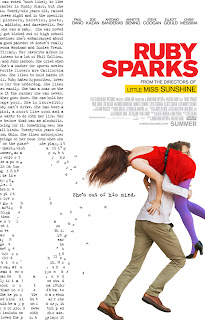 After making a splash in 2006 with their debut feature, Little Miss Sunshine, the husband and wife directing duo of Jonathan Dayton and Valerie Faris did not return behind the camera for another film until now.  After having your first piece of art so heralded, the pressures of finding the perfect follow-up can be a soul-crushing ordeal.  Many artists strive to find that creative spark and that perfect piece of material that will keep them from becoming a one-hit wonder, only to fall flat on their faces and quickly disappear into obscurity.  Thankfully, Ruby Sparks is a wondrous follow-up, full of wonderful characters and a high-concept premise that actually delivers through to the very end.

Calvin Weir-Fields (Paul Dano) was such an artist.  His first novel at the young age of 18 catapulted him to the top of the New York Times best-seller list.  He was mentioned in the same breath as J.D. Salinger.  He hit the lecture tours and soon realized he would not be able to top his previous creative endeavors.  The writers block wall was in front of him and there was no way he could drive around it.  Ten years later, he still talks on the same book tours and answers the same questions about his inevitable follow-up, but those pages do not pour out of him as he sits in front of his manual typewriter. 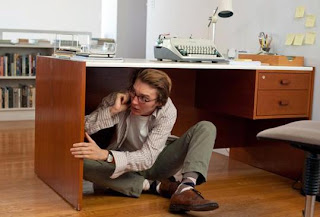 His psychiatrist (Elliott Gould) recommends that he write about one of his possible encounters with a woman while walking his dog.  That night the dreams come fast and furious.  He sees his dream girl, Ruby Sparks (Zoe Kazan), and he wakes with a new fervor.  The pages fly out of his typewriter.  Ruby Sparks is the girl of his dreams and the inspiration for his next novel.  She's the perfect manifestation of his every desire.  But when he wakes the next morning, she is no longer a dream, but in his apartment cooking him breakfast.

Any rational human would question his sanity at this moment, and that's what Calvin does.  He goes out of the house, Ruby on his heels, to make sure his mind isn't deteriorating, only to find he isn't the only one who can see and hear her.  She is the real deal, and she is everything he ever wanted.

A concept like this could quickly deteriorate into schmaltz, but this script isn't afraid to take chances.  Calvin's brother, Harry (Chris Messina), could easily fall victim to Apatow-esque humor when he eggs on his brother to rewrite Ruby.  But Calvin is happy with his creation and the new-found love of his life.  And just like any relationship, what originally draws one to someone could become the one thing that tears the relationship apart.  The problem is, no one is perfect, and after they delve into a real-world relationship, those little fractures start to appear. 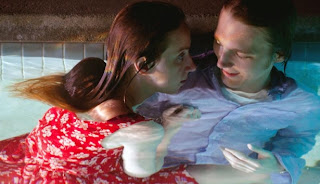 This is where the script really shines.  Calvin goes into rewrite mode to restore Ruby to his ideal dream girl, and nothing will ever be the same.  The constant rewrites send Ruby all over the map, and Zoe is pitch-perfect as she embodies the changes in her character.  The Manic Pixie Dream Girl stereotype is ripped to shreds, and it makes sense that Ruby's character would do such a thing, considering the script was written by Zoe. Writing the script was her way of showing her range as an actress.  She even outshines veterans Annette Bening and Antonio Banderas, as Calvin's hippie mother and step-father, in a sub-plot that does more to detract than to help move the film along.  It's a necessary step into the arc of Ruby's character as a real human, but the momentum just seemed to stop, and tonally, felt like a different movie.

Once Calvin and Ruby are back in LA, those cracks become even more apparent, and Calvin must do his final rewrite for her character.  To say the film takes a tonal shift would be an understatement.  What was previously light and fluffy hits a dark patch, and I must applaud the filmmakers for making that choice, even if it does make the end a little tougher to swallow.

Ruby Sparks is a charming rom-com that should make decent counter-programming against the studio slate of the crowded summer season.  Like Dayton and Faris's previous film, word of mouth should be strong, allowing an extended run through the end of the season.