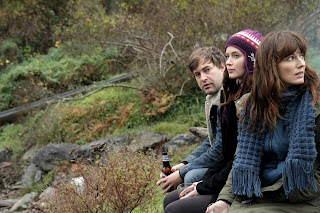 It's Really Complicated
by Mark Dispenza

The complex relationships between sisters and the people they love outside the family offer plenty of laughter and drama in Your Sister's Sister.  This latest indie feature from writer-director Lynn Shelton was made on a micro budget but has considerable appeal based on an outstanding script and the chemistry among its principle cast members.

We've been seeing a lot this past year of actors Emily Blunt (Salmon Fishing in the Yemen, The Five-Year Engagement) and Mark Duplass (Darling Companion, Safety Not Guaranteed), and I'm pleased to see that they are losing none of their appeal from the heavy exposure.  Indeed they both rise to the challenge and improve with each new role.

The story unfolds as Iris (Blunt) decides to intervene to help her best friend, Jack (Duplass), recover from a long period of mourning the untimely death of his brother.  She invites him to spend some time alone in her family's cabin on a remote island off the coast of Washington.  On arrival he is surprised to find her sister, Hannah (Rosemarie DeWitt), seeking recovery from the break-up of her 7-year relationship with a lesbian lover. 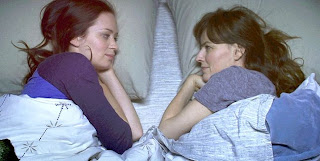 A drunken encounter between Jack and Hannah leads to complications with the unexpected arrival of Iris.  It turns out that Iris and Jack have unresolved feelings for each other, and Hannah has a hidden agenda that results first in hijinks, and then an emotional collision that severely tests the bonds that exist between each of the characters.

Unfortunately I can't reveal any more than that, because it's the successive revelations and how the characters cope with them that give the story its strength.  The plot is cleverly paced and the dialogue is both humorous and revealing, all the more impressive because I understand that it was based in improv.  I don't like improv dialogue as a rule, because it usually results in conversations that sound a little too flat and ordinary in terms of advancing the story.  That certainly was not the case here.  The dialogue is concise, witty and insightful. 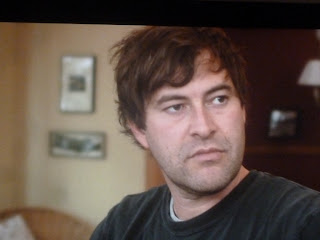 It's worth mentioning again how impressed I am with the abilities of both Blunt and Duplass to create realistic chemistry not only between the themselves in this film, but with the range of other actors they have been cast with in recent months.  They seem to be getting better, and I expect the best is yet to come from both of them.

Posted by Mark Dispenza at 9:52 PM