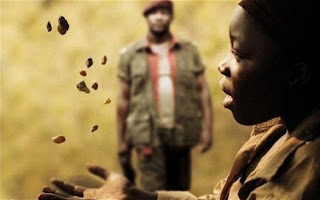 A Childhood in Hell
by Mark Dispenza

The tragic story of sub-Saharan Africa's child soldiers is brought to life in War Witch.

Canadian Kim Nguyen wrote and directed War Witch and shot it on location in the Democratic Republic of the Congo, only the second feature film in history to be made there.  He recruited a local, Rachel Mwanza, as his lead actress.

The story opens as 14-year-old Komona, played by Mwanza, tells her unborn child the story of how she became a child soldier two years before.  Rebel fighters showed up in her village one day, murdered its inhabitants, and forced Komona to kill her own parents. The young children were spared as new recruits in the rebel army.  In order to survive, Komona must set aside her grief and accept the military training forced upon her by the rebels.  What follows is a life of fear and bloodshed, and Komona begins to realize that if she remains there, her days are numbered. 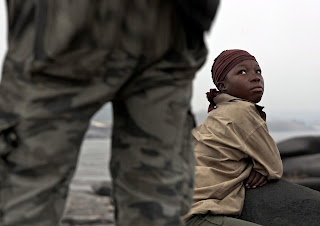 She develops an ability to communicate with the ghosts of the dead, who warn her of impending danger.  Armed with that information, she is able to detect the presence of government soldiers and avoid ambush.  Her ability quickly brings her to the attention of Great Tiger (Mizinga Mwinga), the rebels' supreme commander.  He promotes her to the position of his official "war witch," a dubious honor, as he killed the previous three young women to occupy that role.

She becomes friends with an older boy called Magician, who protects her from the cruelty of her commanders and becomes her closest confidante.  After a particularly brutal encounter with the military, he convinces her to run away with him.  Their rebel "family" is not keen on letting them go and become determined pursuers. 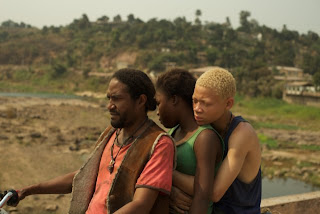 Through the eyes of Komona, Nguyen brings to life the tragic story of Africa's child soldiers.  Forcibly recruited at very young ages, they suffer a loss of innocence and live a traumatizing life of fear and brutality, forced to perpetrate atrocities on others for their own survival.

Like Beasts of the Southern Wild, another film that interprets stark reality through the lens of magical realism, War Witch stars a young local without prior acting experience.  Mwanza won Best Actress at the Berlin International Film Festival and is now well-positioned for a bright career.  She has said that she used her own personal tragedy and abandonment by her parents to inform her interpretation of Komona, and she does so to good effect.

War Witch is more than a story of lost childhood and the tragedy of war.  It's about love and the human capacity for hope and survival even in the most horrific of circumstances.  Its powerful message underlies Canada's choice to submit the film as its official submission to the Oscars in the category of best foreign language film, where it is now among the five finalists for that honor.

War Witch begins a limited theatrical run in the USA on March 8 in Southern California.

Posted by Mark Dispenza at 7:47 PM