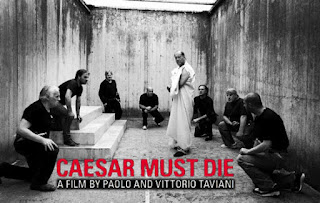 Art and Lifers
by Mark Dispenza

Life imitating art imitating life is at the heart of Caesar Must Die, a feature documentary from Taviani brothers, Paolo and Vittorio (Kaos).

Intrigued by reports of a staging of William Shakespeare's Julius Caesar at a maximum security prison in Rome, the Taviani brothers decided to bring their cameras and follow the six months of rehearsals leading up to the play's premiere performance.  The result is a stimulating view of the power of art to promote introspection and inspire its participants to loftier ideals.

The film opens to the final scenes of the play's premiere performance before a live audience of friends, family and supporters invited to the prison auditorium for the occasion.  The triumph of their accomplishment is reflected on the faces of the performers as they are rewarded by a standing ovation.

And then they are returned one-by-one to their cells, the home where they will live for all or most of their lives, for these are hard men, imprisoned for "life meaning life" or lengthy sentences of 25 years or more for crimes ranging from drug trafficking to murder.  Some are members of Italy's notorious Camorra criminal syndicate or other mafia organizations. 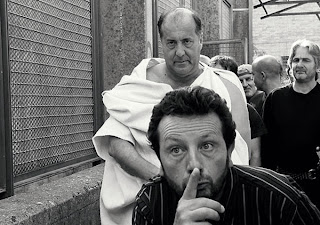 One of the most chilling aspects for me was the capacity of these men to charm the unwary and win their confidence.  They are natural actors and undoubtedly, that ability supported and enabled their prior criminal livelihoods.  Their charisma served as camouflage that masked their horrific intent from the victims until the trap was sprung, and there was no longer an escape.  It was frighteningly easy to cheer them on and root for their success.  Perhaps it's in our nature to believe in the good intentions of our fellow human beings.  We are willing to overlook their shortcomings and expect the result we want.

These men were opportunists in life and rarely considered the long-term consequences of their actions on both themselves and others, but the rehearsals made it obvious that the actors work of inhabiting their roles forced them to look deeper and explore the motivations of their characters, and in so doing, learn about themselves. 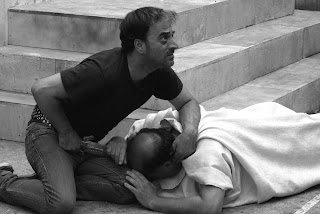 There are captured moments during rehearsal when a scene brought out emotions that tied the context of a line to something from the inmates' own lives.  At one point Bruto breaks down and is unable to continue,  as he speaks words that bring a memory of his past life flooding back to the present.  Cesare and one of the play's plotters almost come to blows when the inmate's lines hit too close to home, and Cesare becomes angered at what he sees as the inmate's real-life betrayal. 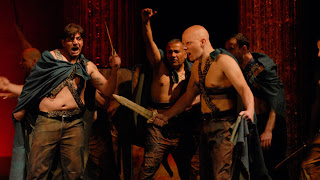 Shakespeare wrote about the tragedy of human lives and the consequence of their choices, and while he chose high-profile subjects for his characters, the lessons were easily transferrable to those who sat in the audience.  It is the source of the power of his work, and the reason it continues to resonate centuries beyond his passing.

The power of art to transform is brought home when Cassio is returned to his cell following the ovation at the premiere.  He is lost in deep thought and feels obvious regret when he says, "Ever since I discovered art, this cell has truly become a prison."

Caesar Must Die was Italy's submission to the Oscars in the category of Best Foreign Language Film, but alas, did not make the final cut.