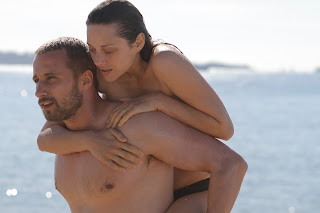 A Time to Fight, A Time to Love
by Mark Dispenza

Two people reeling from disasters, economic and physical, find their way in the arms of each other in Rust and Bone.

The French language feature reunites filmmaker Jacques Audiard and screenwriter Thomas Bidegain, who are best known for their collaboration on the 2010 Oscar-nominated foreign language film, A Prophet.  They adapted Rust and Bone from a story by Craig Davidson, an up-and-coming young writer whose stories often dwell in the dark world of fighters and drug addicts.  Like Davidson's writing, Audiard's film is a raw and unapologetic look at humanity in crisis. 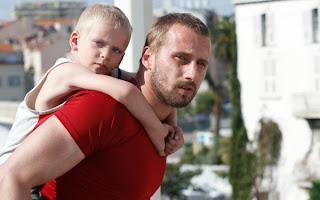 Ali, played by Matthias Schoenaerts (Bullhead), is broke and emotionally destitute when he leaves his drug-dealing wife in Belgium, headed with his young son, Sam, to his sister's house in the south of France to find some sense of stability and family.  Ali's prospects are slim, with little education and no skills beyond his training as a prizefighter.  His sudden arrival presents complications for his sister and her husband, who are going through their own economic travails.

A chance encounter at the night club where Ali works as a bouncer introduces him to Stephanie, played by France's Oscar-winning superstar, Marion Cotillard (La vie en Rose).  Their worlds could hardly be any more different.  Stephanie trains killer whales and performs in a show at the local marine park.  While it's obvious that she has some emotional issues of her own, they pale in comparison to the future that's in store for her.

In the middle of a show, one of the whales gets overly rambunctious and causes an accident that leads to the loss of both of Stephanie's legs below the knees.  She is devastated and sees her life as over.  Alone and emotionally despondent, she is driven to reach out to someone, and that person is Ali.

The two meet again for the first time since their encounter at the night club.  Unlike others who are obviously uncomfortable with Stephanie's disfigurement, Ali hardly seems to notice and treats her like his other girlfriends.  He pushes her to live normally, even to the point of carrying her into the ocean so she can swim again.

But Ali is also a man-child.  He lives for each day with no consideration for the future and behaves as he feels in the moment, whether appropriate or not.  His attitude keeps him trapped inside his gritty, struggling existence.  One feels for little Sam, who must find his way in the care, or sometimes not, of a father little more mature than he is.

Stephanie wants more from Ali than to be one of his girlfriends.  She wants his full and undivided love.  One of Ali's missteps brings his emotional struggles with Sam, Stephanie and his sister to crisis, ultimately leading to a climatic event that will force him to make the choice he's been avoiding, and hopefully to becoming a responsible man to Stephanie and father to Sam.

Audiard's film is physically raw, but not in a crass or revolting way.  The scenes of Ali's fights and Stephanie's struggle to adapt to her new physical limitations have a quality that combines the terrible beauty of their trials with an emotional journey from tragedy to triumph.  One of the most beautiful and allegorical scenes in the film is a bloody fight that Ali is losing until he sees Stephanie, struggling with a cane to walk to him on her new prosthetic legs.

Rust and Bone resonates emotionally with critics and festival-goers with whom I've discussed it, and it appears on a number of their favorites lists for the year  The story has a quality that encapsulates the outward struggles of our times with a human-scale response that reminds us that despite our limitations, it's love that unites us and will lead us to triumph in the end.  Rust and Bone is one of the most satisfying cinematic experiences of the year.

Posted by Mark Dispenza at 9:21 AM