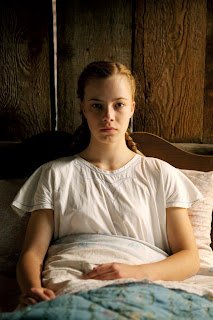 A young girl suffers a devastating loss of innocence during the collapse of Nazi Germany in Lore.

14-year-old Lore, played by Saskia Rosendahl, lives a sheltered life in a fine home in the German countryside.  It is a privilege afforded by her father's rank as an officer in the Nazi SS.  But now the Fuhrer is dead and American troops are occupying the land.  In a rush to escape judgement, Lore's parents abandon her and her four siblings, including her infant brother.

Lore is forced to lead her younger brothers and sister on a trek by foot for miles across occupied Germany to her grandmother's home in Hamburg, their only hope of safety.  With no money and few things to trade, Lore has to adapt to the hardship of the journey and survive by her wits, all while scrounging for food for her little brothers and sister. 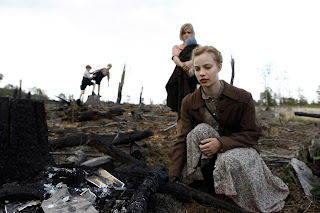 They encounter a young man named Thomas (Kai-Peter Malina), and a symbiotic relationship begins as they cling to each other for mutual sustenance.  However, the relationship is an uneasy one because Thomas carries papers identifying him as a Jew, the very people Lore's parents taught her to hate.  As the days unfold Lore is forced to come face-to-face with her parent's complicity in genocide, and the world she grew up in is exposed as a terrible fabrication.

Lore is directed by Australian Cate Shortland from a screenplay she adapted with Robin Mukherjee from the Dark Room, a novel by Rachel Seiffert.   It is a German-Australian co-production and was Australia's official entry to this year's Oscars in the category of Best Foreign Language Film.

Shortland succeeds in telling an individual story - a young girl coming-of-age, discovering her sexuality, letting go of childhood fantasy and unconditional belief in the face of harsh adult reality - while at the same time using her protagonist as a metaphor for Germany at the close of the second world war.  After her illusions are shattered, Lore is desperate to survive as she faces previously unimaginable hardship.  At the same time the new reality of a divided Germany is settling in.  Thomas is much like the war's victors.  He is attracted to her and truly cares about Lore and her siblings, but he is ready to abandon them if it better serves his purpose. 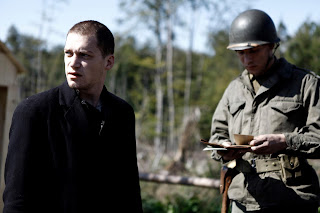 Rosendahl barely leaves the frame for the entire duration of the film, a lot of pressure for a teen actress in both her first feature and first leading role.  Like her character she rises to the challenge and excels.  Much of her emotion is conveyed by facial expression rather than words, and we can clearly see Lore's evolution from beginning to end.  Rosendahl's performance earned her the Shooting Stars Award at the Berlin Film Festival, Best Actress at the Stockholm International Film Festival and the Australian Film Critics Association Award for Best Actress.  She will soon begin work on another feature film.

Lore is currently in release in the USA.

Posted by Mark Dispenza at 5:35 AM