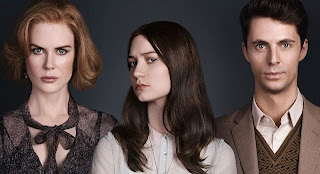 Sleight of Hand
by Mark Dispenza

No matter what you think you know, Stoker will mess with your head in ways you cannot yet imagine.

I admit that I went into this film with the lowest of expectations, despite Korean filmmaker Chan-wook Park's impressive filmography, including the cult classic, Oldboy.  But I made the mistake of reading a couple of reviews this past week, and the critics are not being kind.  Coupled with the fact that I had not been able to catch it at a pre-screening, and therefore, missed the opportunity to see it from a completely fresh perspective like the audiences at Sundance, and I was admittedly reluctant.  Yet I wanted to take a look, because despite the critics, audience conglomerated reviews are running heavy on the positive side.

I'm not going to spend a lot of time on the story, because frankly, a 15-minute short film can be made off this plot, but I'm sure it wouldn't be nearly as much fun.  It's a noir thriller that begins with the funeral of young India's father.  India is played with just the right amount of girlish innocence with a smattering of dark undertone by Mia Wasikowska.  After her father's death in an unfortunate accident, she's left alone in the world with her unstable mother (Nicole Kidman), not a warm and fuzzy situation.

Suddenly Charlie (Matthew Goode) appears to comfort the two women and help them through this difficult time.  What's really odd is that India didn't know her father had a brother, and she is encountering this man for the first time.  He's a nice guy and makes himself as useful to them as possible, but he has a strong and rather creepy interest in India, and relatives and housekeepers who get too suspicious of him have a way of disappearing.

That's all you need to know, because the fun of this movie is not the story, but the way that Park manages to keep you mesmerized by what you see on the screen, all the while messing with your head and fooling you every step of the way.

Recall, if you will, the last time you saw a master magician perform.  You knew going into the theater that he really wasn't going to make doves appear out of thin air or cause his lovely assistant to levitate, so you kept looking for the wires and the trap doors.  He wasn't going to fool you.

But unlike the cheap magicians who are just there to get a paycheck, the master obviously loves his craft and loves entertaining the audience.  He has mastered his art so completely that no matter how hard you look, you just can't see those wires and those trap doors.  By the end of the performance, you know you've been fooled by a real master and you delight in the fact that you can't figure out just how he did it.

After all, you watched him like a hawk every step of the way.  Even better, the master magician loved confounding and entertaining you, and even as the final curtain falls, he can't resist leaving you with the one last trick he has up his sleeve.  You respond with enthusiastic applause. 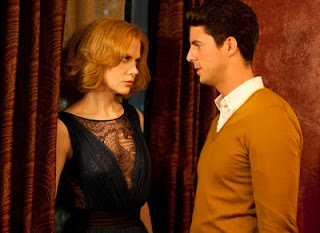 Park was inspired to become a filmmaker after he saw Alfred Hitchcock's Vertigo, and he pays homage to the master of suspense by using the same kind of camera and lighting techniques to maximize the tension felt by the audience.  But like any apprentice of real talent, Park has mastered the craft on his own and now goes beyond anything Hitchcock ever did.  There are shots of the actors showing too much headroom in the frame, or too little.  You're forced to look past objects that dominate the foreground in order to see what's going on with the actors in the background.

It goes on and on.  I marvel at just how much time Park must have spent with his cinematography crew to get those effects.  It's obvious that a lot of effort and pre-production time went into every frame of film.  Every shot is a work of art.

Just like the master magician with one last trick up his sleeve, as the final scene concludes, Park delights the audience with a tongue-in-cheek bow to his craft by - SPOILER ALERT - rolling the end credits in reverse.

Posted by Mark Dispenza at 9:43 PM