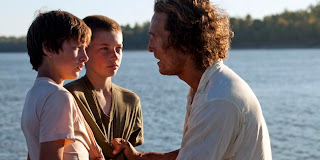 The Way 0f the River
by Mark Dispenza

Mud is a coming of age tale that echos the stories of Mark Twain.

Although the film is set in contemporary Arkansas, the lives of the people who derive their living from the mighty Mississippi aren't so different from their ancestors of a century ago.  It's here that Ellis, played by Tye Sheridan (The Tree of Life), and Neckbone (Jacob Lofland), two young men caught between the responsibilities of adulthood and the wonder of childhood, rush to complete their chores so they can sneak out to find adventure.

Find it they do.  They go out to a small island in the middle of the river to locate the wreck of a boat that became lodged in a tree during the last big flood.  They hope to make it their secret hideaway, but someone has beat them to it. "Mud," played by Matthew McConaughey, has made it his temporary hideout, while he awaits rendezvous and escape with Juniper (Reese Witherspoon), the love of his life. 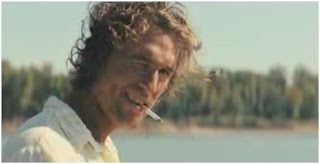 Mud is a fugitive from the law, and while he does not want to attract attention to his location, he finds the boys to be useful and all too willing allies he can use to make supply runs without giving himself away.  Over the course of a few days, Ellis learns a lot about love and personal responsibility, and he has an incredible adventure while doing so. 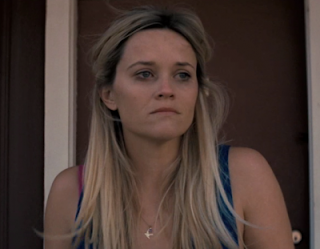 This is a story well-told and a very entertaining way to spend two hours at the movies.  Writer-director Jeff Nichols, best known previously for Take Shelter, confirms his status as a filmmaker who knows how to spin a good yarn and keep the audience completely mesmerized for the duration.  The cast includes Nichols veteran, Michael Shannon, and Sam Shepard in standout supporting roles.

The river itself is a character in the film, which is partially a tribute to the rapidly dwindling population of rural river dwellers, soon to be a vanished breed.  Mark Twain would be proud.


"The Mississippi River will always have its own way; no engineering skill can persuade it to do otherwise..."