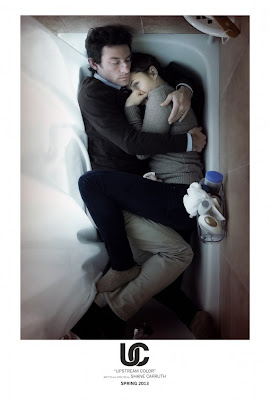 Beneath the Surface
by Zac Ryan

As the Hollywood studios ramp up their release schedule of uninspired and unoriginal summer programming, thankfully we can expect something original, albeit a little strange, in the latest film from Shane Carruth.

Carruth first burst onto the scene at the 2004 Sundance Film Festival with his micro-budget film, Primer, which he claims he made for only $7,000, "because that's how much Rodriguez made El Mariachi for." While Primer tackled what may happen in the future with the possibility of time travel, Upstream Color tries to dig deeper into what may have happened in our past to make us feel how we do in this given moment. It is our own actions, or possibly misfortune, that brings us to who we are now.

Sure, it doesn't sound too original, but how it builds is what really allows Carruth to shine as the ultimate multi-hyphenate (he directed, wrote, starred, shot, co-edited, scored and distributed the film). And just like his previous film, he wants to give you enough pieces to give you something to talk about once the end credits start to roll.

Now before I get into what actually happens in the film, I wanted to give a bit of a spoiler warning here. I'm not going to give everything away, but I feel that this film is best experienced knowing as little as possible. I went in without even seeing a trailer or reading a synopsis, and yet I was transfixed from the opening scene until the end, even if the extra large iced tea kept yelling at me to leave the auditorium for a couple of minutes. I couldn't.

When the film first starts, we witness the Thief (Thiago Martins) digging through some blue orchids. Not for the plants themselves, but for the worm-like creatures within the soil. These worm-like creatures have a side-effect when ingested, leaving the person under a spell, a zombie-like trance, allowing the Thief to get them to do mundane tasks, including memorizing and writing down passages of Thoreau's book, "Walden". One night he finds the unsuspecting Kris (Amy Seimetz), drugs her and uses his power of persuasion to drain her of her life savings, leaving her broke and jobless, as she tries to put the pieces of her life back together.

One night she is drawn to a pig farm that is run by The Sampler (Andrew Sensenig), or so it seems. The Sampler easily blends into any group and setting, and spends most of his time in nature recording its sounds. What for? That's part of the mystery of the film. But it is sound that draws Kris to his farm after several unsuccessful attempts to remove the worms from her body with a knife. The Sampler is able to extract the parasite and implants it within one of the pigs on the farm, which he tags "Kris." 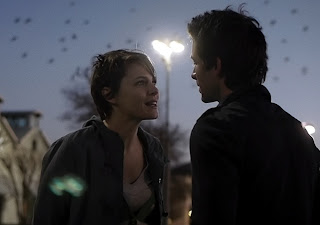 As stated in the opening, this is like nothing you've ever see from one of the major studios (or possibly even one of the many indie distributors), and this is only the first third of the movie. In the last hour of the film, it shifts from the sci-fi set-up to something a little more mundane, a romantic drama. After meeting on a train, Kris finally agrees to have coffee with Jeff (played by Carruth). There's no way to tell how much time has passed, but Kris is on the defensive and attempts to put a stop to any relationship by divulging she has problems which only prescription medicine can help. But this doesn't phase Jeff, as he also has some of his own problems.

The relationship grows, connections are made, and the bigger purpose of the narrative slowly starts to unfold. To go any deeper would be criminal, but to say it all ends up where you believe, you may be shocked in the end. Or maybe I was just entranced while watching the film, slowly manipulated and sucked in by the beautiful cinematography and accompanied score.

If David Cronenberg and Terrence Malick had a child together, it just may have turned out to be Shane Carruth. Let's just hope that we don't have to wait another nine years for his next film. In the meantime, I may just have to watch the film once again to grab the hidden clues that were missed the first time around.

Upstream Color is currently in a limited theatrical run (dates found here) and will be available on most digital platforms starting May 7th.

Posted with Blogsy
Posted by Zoey Rose at 7:16 AM