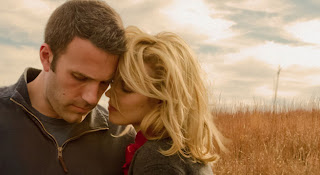 The Meaning in Malick
by Mark Dispenza

The films of Terrence Malick may not be as ethereal as we think, and maybe that's the point.

After viewing his latest feature, To the Wonder, I believe that against all odds, I may have finally come to understand him.  A perennial favorite at Cannes, Malick's films feature stunning cinematography, particularly of the natural environment, and a storyline that is slow, uncinematically focused on the inner thoughts of angst-ridden characters, and somewhat spiritual in feel.  They are usually period pieces and there is a sometimes nebulous thread that ties together generations.  In the Tree of Life, Malick famously interwove his protagonist's memories of childhood with scenes of the dinosaurs.

Audiences and critics have struggled to understand Malick's films since he reappeared at the movies in 1998 with The Thin Red Line, after an absence of over 20 years.  Some of the most talented actors in Hollywood are attracted to Malick, and he has achieved a guru-like status among them that has boggled my mind.  I've always chalked it up to the shallow nature of Hollywood.  Just because something has the appearance of being deep and spiritual, doesn't mean it's not a load of baloney under the surface.

If you're a long-time reader of this blog, you likely know that I have historically struggled with Malick and have been unable to relate to his films, because his stories do not appear to me to contain any kind of narrative arc, and his protagonist does not really change or come to any kind of personal resolution by the end of the story.  That to me is a fundamental violation of the form and purpose of storytelling.  If there is not a discernible hero's journey, what's the point?

And then I saw To the Wonder. 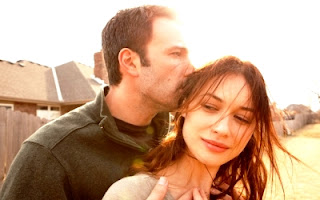 The story follows the off again, on again romance and marriage of Neil (Ben Affleck) and Marina (Olga Kurylenko).  Typical of a Malick film, the relationship unfolds visually against voice-overs of the characters, as they question and second-guess each other.  Malick's characters are improbably articulate, almost poetic, in their musings.

Earth is a character in the film, also par for the course with Malick, and his characters are surrounded by incredible natural beauty, captured in stunning cinematography by his long-time director of photography, Emmanuel Lubeski.

Neil can't seem to stay satisfied, despite many wonderful moments of love and happiness with Marina.  The two interact lovingly and tenderly in one scene and hurt each other carelessly in the next.  They break up.  They get back together.  Neil sends her away and has an affair with Jane (Rachel McAdams), who he's known and coveted for most of his life.  When he's with Jane, he hurts her, too, even though he knows she's had a tough time and trust does not come easy to her.

Marina is also complicit in the ongoing sabotage of her relationship with Neil and has considerable trouble in her relationship with her daughter.  By the way, it's wonderful to find out that Bond girl Kurylenko is also a talented actress.  In typical Hollywood fashion previous filmmakers have utilized her as little more than eye candy.  Malick utilizes her to full effect and allows her to show a beauty that is more than skin-deep. 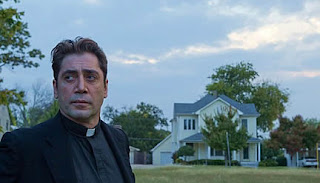 Although Neil is the central character of the film, there is the parallel journey of the Catholic priest, Father Quintana, played by Javier Bardem, who can always be counted on to deliver a memorable performance.

Although Neil and Father Quintana live in the same city and Neil is one of Quintana's parishioners, their narratives intersect infrequently, but notably during moments of major transition in Neil's life, such as marriage, childbirth and divorce.

The film's focus on Neil is broken up by scenes of Quintana going about his priestly duties, engaged in a negative inner dialogue in which he agonizes over the Lord's purpose for him.  Quintana does not believe his life means anything, so he seeks an elusive higher calling that will leave him fulfilled.  What's amazing is that all of this negative self-talk occurs over scenes in which Quintana is actively engaged with people during the most important moments of their lives, and as he comforts those who suffer, very often their sole lifeline during a terrible time.

In one memorable scene Quintana goes to the prison to hear the confession of a convict.  At first the convict is evasive and defensive, refusing to admit to his actions in some undisclosed crime.  As he talks to Quintana, he begins to complain loudly about the bright light coming through the window.  He is in an exaggerated amount of physical discomfort and becomes emotional, near the point of breakdown.  Is he in pain because his conversation with Quintana illuminates the terrible error of his ways?  Quintana is so caught up in his negative self-talk that he hardly seems to notice.

In another scene a parishioner afflicted with Down's Syndrome notes Quintana's morose state and points out that there are many churches in the city, and therefore, many pastors are required.  If people didn't need them, why would they be there?

Is that Malick's message?  As we go through life agonizing over our purpose and fighting to align ourselves with the person or thing that we believe will make us happy and fulfilled, are we missing the reality that the people we touch everyday are the meaning of our lives?  Are we missing the beauty all around us by our perpetual unhappiness?  Could it be that we are just a speck on the surface of the natural world and on the long axis of time, and all of our personal discomfort is ultimately meaningless against the broad tableau of our existence?  If that's the case Malick may be giving us a truly illuminating and profound statement of the human condition.

Then again, maybe I'm wrong, and my brain is finally fried after seeing too many of these films and trying to decipher their meaning.

To the Wonder is currently in limited theatrical release and can also be downloaded from iTunes.

Posted by Mark Dispenza at 1:06 PM