After an 18 year journey of romantic celebration, Before Midnight delves into the reality of love.

This last installment of Richard Linklater's Celine and Jesse trilogy explores the challenge of sustaining romance years after the consummation of a relationship. Linklater has directed a number of films that focus less on action and more on smart and expressive dialogue.  Included among them are personal favorites like Dazed and Confused, The School of Rock and Bernie. .

Audiences were first introduced to Celine and Jesse in Before Sunrise back in 1995.  Jesse (Ethan Hawke) was a young American on the last day of a two-week journey through Europe when a chance encounter on a train introduces him to Celine (Julie Delpy), a French girl returning to her home in Paris.  He convinces her to get off the train with him in Vienna, and they spend a romantic evening together before he must return to the USA the next morning.

In Before Sunset nine years have passed when Celine and Jesse encounter each other again in a Paris book shop.  With only a short time left before Jesse must catch his flight back to the USA, they reignite the romance that both have relived over and over again in their hearts and minds during the long years apart.  Complicating matters is the fact that Jesse is now married and has a young son.  Will he decide to miss his flight and change his life forever to salvage what might have been that night in Vienna years ago? 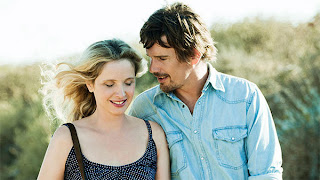 Before Midnight takes up nine years after the events of the second film.  Celine and Jesse have been together since that time and have cute little twin daughters of their own.  The starry-eyed romantic idealism of nine years ago has now given way to the reality of Jesse's vindictive ex-wife, long periods of painful separation from his son, the challenge of raising a family and Celine's suspicion that she took a wrong turn somewhere in life.  It's the end of a six-week vacation in the Greek islands.  Their friends arrange to babysit their daughters so that Celine and Jesse can enjoy a rare romantic evening alone in a hotel before they return to Paris.

What is supposed to be a night of passion turns precarious when the two begin to discuss feelings suppressed during this time of familial obligation that supplanted the romance of their early years.  As emotions run high and the night slips away, will love conquer doubt and fear?

Before Midnight is worth the time, but be aware that this film is different in tone from the first two installments of the trilogy.  It is more cerebral and less romantic.  Even the title of the film differs from its predecessors in that it is more allusion than actual ticking clock.

In fact, the first hour of the film dragged for me.  I found myself looking at my watch at least twice while Celine and Jesse engaged in intellectual discourse about the nature of love with the group of friends they stay with in Greece.  It's smart conversation to be sure, but the experience is more akin to watching an episode of The View or one of those political panels on Sunday morning news shows.

The story doesn't really take off until the second half, when it's just Celine and Jesse again.  It's the chemistry between these two that gives Linklater's trilogy its heart and soul.  There's a connection that resonates.  How else can you explain how films that consist almost entirely of two people talking, as they stroll through beautiful European cities, continue to attract such a following? 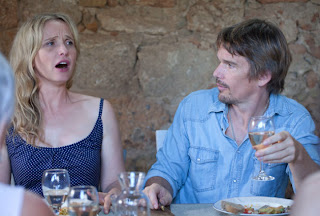 It's been fun to watch Hawke and Delpy grow as actors.  Hawke was just a tad more forced and tentative in Before Sunrise.  After nearly two decades of playing this character, he is now a much more accomplished and mature actor.  The emotion with which he plays Jesse is real and believable.  And Delpy...wow!  From the beginning her face has been so radiant and expressive that she could convey the feelings of her character entirely without dialogue if called upon to do so.

Taken as a whole, the Celine and Jesse trilogy is the best combination of emotional punch and intelligent dialogue that I've ever encountered in films of the romance genre.  In fact, I can't think of the Celine and Jesse films as "chick flicks" because their impact transcends gender. 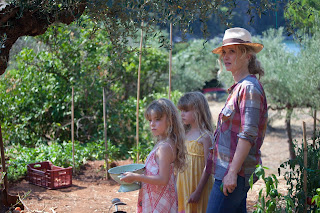 I remember the odd combination of euphoria and sadness I felt at the end of each of the first two films.  Memories of my own Celine came flooding back each time.  Like Celine and Jesse, we first encountered each other on a train, and it was love at first sight.  Her name was Agnes, a sound that comes across as dated and old-fashioned in English, but pronounced in the French manner, is exotic and alluring.  It was on the Ginza subway line in Tokyo, when I lived there during the late '80s.  She was French-Vietnamese and I loved everything about her - her earnest heart and keen mind, her physical beauty.

Like Jesse, I was under a ticking clock.  In two weeks I would return to the USA, with no idea when I might come back to Japan, if ever.  But unlike the lovers in these films, there was no subsequent reunion, no opportunity to explore what might have been.  I never saw her again.

It's strange how all these years later I can't stop thinking of her.  For months she won't enter my mind, then suddenly she will invade my memories again in a single unexpected moment.  I can still recall every detail about her, long after my relationships with other women have diminished to near obscurity.

In the last hours of my life, I know that I will think of her again.  I wonder if she still thinks of me.

Posted by Mark Dispenza at 7:28 AM