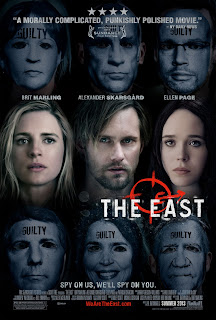 Torn Between Worlds
by Zac Ryan

Indie darling Brit Marling re-teams with her Sound of My Voice co-writer/director, Zal Batmanglij, in the taut and tension-packed The East.

In her first assignment at a new job, the young and innocent, Jane (Marling), is tasked by her boss, Sharon (Patricia Clarkson), to infiltrate the anti-corporate and anarchic group known as The East. Jane lies to her husband, dies her hair and takes on the alternate identity of Sarah, befriending someone she believes is a part of the collective that she met while free-riding in a train car. She thinks fast, finding a solution to infiltrate the secretive group.

As an outsider, she isn't easily accepted into the fold. One of the members, a deaf female, is quick to catch on that Sarah isn't who she says she is. Sarah confides in her, explaining that she is on a mission, in hopes that that she can create a bond with the woman. But that isn't the only hurdle that Sarah faces to be accepted. There is a wonderful dinner scene where Jane/Sarah learns to help others instead of only worrying about herself. 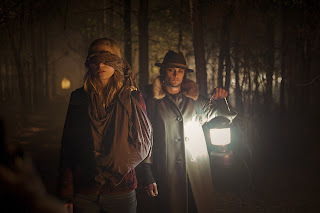 And the person behind such great wisdom? Benji (Alexander Skarsgård), with his long locks and beard, is the leader of the group. His piercing eyes, his smooth demeanor and his smile are all he needs to enrapture his flock. Together they fight back against the big corporations that are polluting and ruining society.

The first of the "jams" in the movie has the group conning their way into an upscale party for a big pharmaceutical company. This is Doc's (Toby Kebbell) chance to get revenge on those who caused his on-going seizures and other ailments. Together they'll spike the celebratory champagne with their own drug, hopefully causing harm to get the drug off the market, and in the end, save more lives. 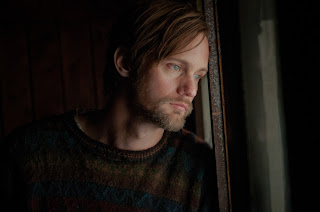 Will Jane/Sarah figure out what is the right thing to do and successfully bring The East to justice for her employer? Or will Stockholm Syndrome take hold, causing her to fall for Benji, even though she's not really a captive? She must judge what's right, not only for her, but for her employer, the victims of the big corporations, and the possibility of a bigger catastrophe around the corner.

Marling consistently creates complex roles that are rare in mainstream films, especially those with a female lead, and we should applaud her for that.

Zal Batmanglij grows as a director from his previous collaboration with Marling. This film is bigger in scope, the cast larger, and at times, the idea seems to outgrow Sound of My Voice. The only problem, like in the previous film, is that it seems to drag in a couple of segments, yet still manages to click along at a steady pace overall. As Batmanglij's budgets grow, hopefully he'll have a shot at an even wider audience, and let's hope he brings Marling along for the ride.

Posted with Blogsy
Posted by Zoey Rose at 8:00 PM