Understated in its brilliance, The Future is a touching and imaginative exploration of the human condition in an era of diminished expectations.
This is the second feature film written and directed by Miranda July.  Her first film,  Me and You and Everyone We Know, swept multiple film festival audience favorite awards in 2005.  By her own admission she is a performance artist and short story writer first, and those artistic sensibilities give The Future its unique perspective.
As the story opens, Sophie (July) and Jason (Hamish Linklater) are a 30-something couple who have lived together for some time and are beginning to realize that their lives have not reached the pinnacle of career and financial success where they imagined they would be.  They decide to push the issue by quitting their nowhere jobs, turning off the Internet and adopting a stray cat.  This is not just any cat.  Paw Paw, as they call him, is in poor condition and may not live even six months.  On the other hand, with a little loving care, he can live another five years, the vet tells them.  When the couple arrives to pick him up, they are told that he needs to remain in the vet's care for 30 more days before he will be ready to go home with them.
The wait turns into a period of anxiety, particularly for Sophie, as the couple is left with another 30 days to contemplate what their life will be like when they bring Paw Paw home and what the future will hold for them all.  As Jason searches for a fulfilling new job, Sophie begins to worry that she is living the wrong life and seeks escape through an affair with a successful, older man.  She moves out of the simple apartment she shares with Jason and into the beautiful suburban home of new paramour, Marshall (David Warshofsky), as Jason faces the terrifying prospect of life without Sophie.
Interludes of fantasy provide insight into the inner conflict taking place within both Sophie and Jason.  The film is narrated by Paw Paw (the voice of July), as the cat impatiently awaits his imagined better future with the adopting couple.  When Sophie moves in with Marshall, Shirtie, a security blanket of sorts that Sophie has carried with her since childhood, follows her under its own power to her new home, despite everything she does to leave it behind.  Jason seeks the wisdom of the Moon and has conversations with his celestial mentor that lead him to the realization of his own personal power. 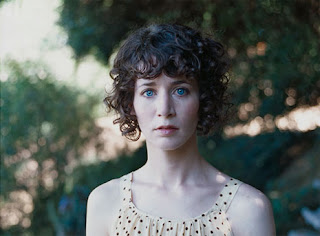 Miranda July
I was surprised by just how much I love this film, and I realize that it is very likely to be on my top 10 list for 2011.  Why the surprise?  This is a low-budget film with no big stars.  Its principle actors, July and Linklater, are relatively soft-spoken and have none of the power screen presence one expects from leads in an exceptional film like this one, yet both are charismatic in a very understated way.  In an age of fast cuts, the scenes are long and contemplative, focusing on visual elements with very limited dialogue.  There is no real action, and even the break-up scene is low-key, without the shouting and clever insults that one finds in the typical Hollywood film.  Most movies of this type put me to sleep, but definitely not this one.
Like the proverbial deep lake, this film has an abundance of life below its serene surface.  This is a story created by someone who is obviously a keen observer of human nature and knows how to present it to audiences using a perspective that is fresh, touching and entertaining.  The dialogue is sparse and bereft of clever lines, yet it is exceptionally well-written, complementing the visuals and infused with subtext that speaks volumes without the need for long discourse.  In sum this film has the finished appearance of a project that resulted from considerable effort and attention to every detail.  It is truly a work of art and a fitting showcase for July's considerable talent.
Incidently July is also the wife of Mike Mills, who wrote and directed Beginners, another exceptional American independent film released this year.  The two met when they both debuted at Sundance in 2005.  With such incredible talent under one roof, it blows my mind to imagine what the conversations must be like in that household.
The Future is currently in theatrical release across the United States.