Voice of the Innocent 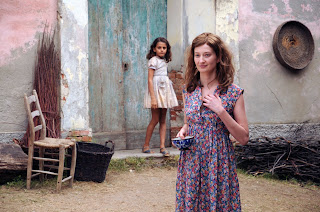 ﻿
The Man Who Will Come
L'uomo che verrà

Giorgio Diritti's cinematic masterpiece, The Man Who Will Come (L'uomo che verra), gives voice to the ordinary people who are the real victims of war.  It iis a dramatization of events leading to the Marzabotto massacre of World War II, during which 770 Italian civilians--mostly women, children and elderly--were executed by the Nazi SS.
In the winter of 1943, an Italian family in a rural area near Bologna struggles to endure the deprivation and injustice of a war forced on them by Italian fascists and their German allies.  8-year-old Martina (Greta Zuccheri Montanari) has refused to talk since the death of her infant brother a few years before, and now she eagerly anticipates the birth of a new sibling as family activity centers around her pregnant mother, Lena (Maya Sansa). 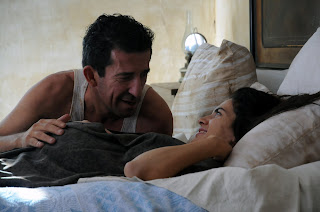 Claudio Casadio & Maya Sansa
﻿
As the war draws closer, life becomes increasingly difficult.  The occupying Germans, who were previously little more than a nuisance, are more and more nervous as the Allied forces draw closer and emboldened Italian partisans step up their attacks.  On a night in September 1944, Martina's baby brother is finally born, just as the SS unleashes a horrific reprisal against civilians they suspect are supporting the partisans.
Like City of Life and Death, The Man Who Will Come is a moving and powerful indictment of war that gives voice to the innocent people whose lives have been stolen by the political agendas of others.  In his director's statement, Diritti said that "representing through film the events of Marzabotto means keeping man's conscience alive and alert, and also educating present and future generations in order that in some future tomorrow another ideology does not deform the meaning of life by annihilating the human conscience." 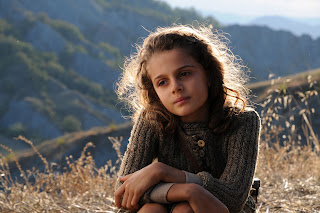 Greta Zuccheri Montanari
﻿
The child, Martina, is representative of the people who live on the land where war is fought.  She is an innocent who  loses her voice at the beginning of the conflict, and she will not regain it until those who wage war are gone.  Most of the story is seen through her eyes in an impressive performance by a child actor. Italian veterans Alba Rohrwacher and Claudio Casadio round out a fine cast.
The Man Who Will Come won three David di Donatello Awards (the Italian Oscar) in 2010, including Best Film.  As of this date it has not obtained USA distribution, so do reserve it on your Netflix queue.

To see a trailer for this film with English subtitles, please visit this link from the San Francisco International Film Festival.
Posted by Mark Dispenza at 3:50 PM