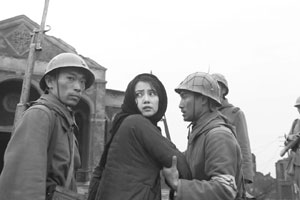 City of Life and Death
City of Life and Death is a dramatization of the 1937 Rape of Nanking, and it may well be the greatest anti-war film ever made.  I have eagerly anticipated its North American release since I first saw it at AFI-Fest in November 2009, and now that Kino International has acquired the rights, I'm elated that it's finally going to happen.
Director Chuan Lu has created a masterpiece in his balanced depiction of an event so traumatic and polarizing that it continues to drive a wedge between China and Japan some 73 years later.  Although accounts differ on all sides, it is generally believed that somewhere between 200,000 and 300,000 people lost their lives during the initial six weeks of Japanese military occupation from late 1937 to 1938.  With all accusations, denials and apologists aside, there is a massive amount of historical evidence supporting the existence of a virtual hell-on-earth in that time, including civilian death and rape on a massive scale, and executions and tortures carried out on a scope rarely seen during the course of human history.

Lu has managed to achieve a remarkable balancing act with this film.  Despite Chinese government backing and strong emotions that linger in China to this day, Lu created a narrative that treats all of its characters with respect and human dignity.  It would have been easy for him to make a jingoistic film, and while he does celebrate the heroism and fortitude of Nanking's citizens, he does it without depicting the Japanese occupiers simply as one-dimensional monsters devoid of human compassion.
Although it did very good box office when it was released in Lu's native China in 2009, the film was pulled from theaters following a pronounced uproar from Nanking survivors, their relatives and others.  It seems that they took offense at what they believe to be Lu's portrayal of the film's Japanese characters as not quite evil enough.
In fact, that is precisely what makes this film so great.  All of the characters are depicted as balanced but flawed human beings caught up in a terrible situation over which they have little or no control.  Murder, rape and mutilation are almost clinically depicted using stark black and white photography and minimal music that might otherwise drive the mood of the scenes.  Our emotions are processed solely through the eyes of the characters. 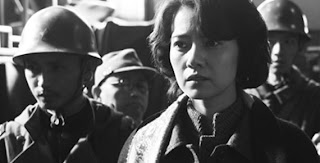 City of Life and Death showcases an excellent ensemble cast, some who play the roles of actual people who witnessed the events.  The major characters include:
This is a film that depicts war as it actually is--mutually destructive conflict over which the participants rapidly lose control and that ultimately leads to dehumanization and soul-destroying trauma for everyone involved.  At the AFI screening, it felt like my fellow audience members would be grateful for any positive respite from over two hours of human misery.  It came with the end credits, when we were told in summary form the final outcome for each of the major characters depicted in the film. 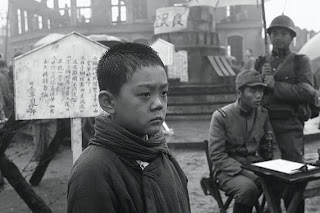 Xiaodouz, the little boy who survived horrific events and escaped almost certain death many times during the course of the film, is living alive and well in China today.  A spontaneous and enthusiastic cheer rose up from the audience.

City of Life and Death releases in the USA following a special screening in New York City on May 11.  See below for the Kino International trailer created for the current tour.
Click here for a Filmmaker Magazine interview with Lu Chuan about the making of City of Life and Death.