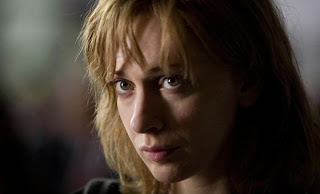 The Double Hour (la Doppia ora) is an Italian noir thriller that has more dangerous curves than a mountain road.  Not since Christopher Nolan's Memento has a film so effectively messed with audience perceptions of reality on a minute-by-minute basis.
Given that this is the debut feature of writer/ director Giuseppe Capotondi, that is high praise indeed.  Like Nolan in Memento, Capotondi has achieved a very complex story structure that might easily collapse of its own weight in the hands of a lesser filmmaker.  The result proves that he is up to the task, and I eagerly await his next feature.
Kseniya Rappoport plays the role of Sonia, an East European immigrant working as a maid in an Italian hotel.  Trapped in a nowhere job, she decides to improve her social life by attending a speed dating event. She meets Guido, played by Filippo Timi, an ex-cop with a dark past, who is currently working in private security for a wealthy client.  The two fall instantly in love and begin a whirlwind romance that disrupts their worlds in ways neither of them anticipate.  During a romantic tryst at the wealthy client's estate, the lovers become victims of a violent robbery, and nothing will ever be the same.
In most noir films the femme fatale is the only one who ever has control, but Sonia is a seductress whose sense of reality is suspect at every turn.  Is she seducer or victim?  or both?  This is a welcome new contribution to the genre that will keep you guessing until the very last moments of the film.

The Double Hour is currently in theaters.