Simple Simon was this year's Oscar entry from Sweden, and many were upset that it made the early short list but not the final cut.  It's easy to see why the film has so many fans. 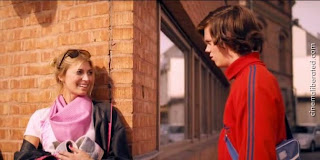 Written and directed by relative newcomer Andreas Ohman, the deceptively well-constructed story is about 18-year-old Simon, an unlikely hero who has Asperger's Syndrome and needs everything in his life to follow a predictable and certain pattern.  When the unexpected strikes, Simon retreats inside his home-made space capsule and pretends to be an astronaut floating in outer space.  The only person who understands him and can coax him back to the real world is his older brother, Sam.  When life at their parents' home gets too difficult, Simon moves in with Sam and his girlfriend, Frida,
It's not long before Simon's antics and his need for constant attention cause Frida to dump them both.  Simon is unable to cope with Sam's subsequent depression and becomes desperate to find him a new girlfriend.  As Simon is forced farther and farther outside of his perfectly aligned world, he gets caught up in a series of misadventures that are both comic and heart-warming.  He meets Jennifer and becomes convinced that she is Sam's perfect soul mate, but Sam won't be convinced.  The stakes escalate as Simon goes to greater and greater lengths to bring Sam and Jennifer together.
Simon is well played by Bill Skarsgard, son of veteran actor, Stellan Skarsgard, soon to be seen as the villainous Martin Vanger when the Hollywood remake of The Girl with the Dragon Tattoo releases in December.


This film succeeds very well as straightforward comic entertainment, but underneath its simple surface lies much wisdom about the trials and unexpected rewards of befriending someone afflicted by such a debilitating condition.  In spite of his limitations, Simon forces himself out of his comfort zone to achieve a greater purpose.  Maybe we can all learn from him.

Posted by Mark Dispenza at 1:53 PM