How Do You Disappear a War? 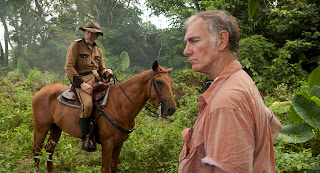 AN INTERVIEW WITH JOHN SAYLES
Part 1:  The Making of Amigo
John Sayles talked to me about the challenges of making his latest independent feature, Amigo, during a recent stop in Santa Barbara to promote his novel, A Moment in the Sun.
Although best known for the 17 independent feature films he has written and directed under his own production company, Sayles is also an accomplished author.  He won an O. Henry Award for his short story, "I-80 Nebraska, m.490-m.205," before he ever wrote a screenplay, and his first novel, Union Dues, earned a National Book Award nomination in 1977.
Like many successful filmmakers in the USA, Sayles got his start working for the king of low-budget productions, Roger Corman, penning the screenplays for Piranha in 1978 and Alligator in 1980.  He won critical acclaim his first time out as writer/director with Return of the Secaucus Seven in 1979, which he financed with his earnings from the Corman films.
Thus began a lifelong pattern of earning money as a successful writer and script doctor in Hollywood, then using it to finance his own independent films. Over the next 30 years Sayles went on to earn critical acclaim as writer/director of independent features like Matewan, Eight Men Out, Passion Fish, Lone Star, and the Secret of Roan Inish.
Amigo is a historical drama and fictionalized account of events that take place when a US Army unit occupies a village during the Philippine-American War. The film stars Garret Dillahunt, Chris Cooper and D.J. Qualls.  While the novel, A Moment in the Sun, is a sweeping historical epic that follows as many as 45 major characters in the US, Cuba and the Philippines during the period, Amigo is set on a village scale. 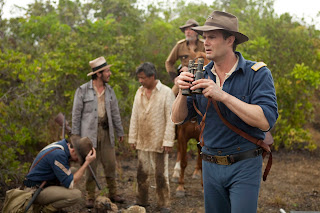 MD:  How did you develop an interest in the historical events that provide the background for both Amigo and your novel, A Moment in the Sun?
JS:  It really came from running into this phrase, the Philippine-American War.  I was doing research for my last novel and I came across this reference.  I’d never heard of the Philippine-American War.  Asking some of my Filipino-American friends about it, they said, “well, I know that it existed, but it was not taught in our schools in the Philippines.”  How do you disappear a war?  Why is it not taught in America?  We won the war.  We’re usually “hey, we won the war!”  Why aren’t we proud and celebrating this thing?  And that got me intrigued about it, and then what I saw was there were a lot of things going on with the psyche of America right around 1900.  The rednecks can take over the South again.  We don’t care if black men can vote.  We’re not going to stand behind them.  Our Constitution says they can, but you can take that right away.  That was the end of Reconstruction.
We had been imperialists before, taking over Indian nations and Mexican lands, but we’d never gotten on a boat and taken over somebody else’s country and said, “you people will thank us for this..."  That happened in a very short time, where we went from the anti-imperialist people who protect the little guy and broke away from those decadent Europeans to being the people who say it’s time we played with the big guys.  We need an empire, too.  It happened in a matter of months and that’s what the big arc of the book is all about as seen through these other characters’ lives. 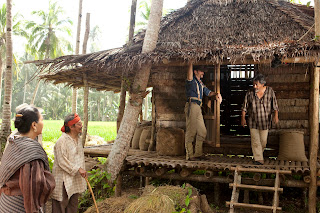 MD:  You said that you financed Amigo yourself.  What were some of the challenges you faced to stay within budget for a period piece like this?
JS:  It’s going to be a little over $1-1/2 million, and you multiply that by three for the United States if you shot it here.  They’ve got real great crew people there (in the Philippines), and good actors and stuff, and we were able to tack onto them.  I realized… that if I can tell a micro-history and set it on a village level, the construction costs will be there, but we’re making it out of what they made it out of back then.  We’re making it out of rattan and palm thatch and bamboo.  All of that grows out of the ground here.  You take a bolo (knife) and you cut it, and you tie them together and you got a hut.  You do that 20 times you got a village.  That’s what our set was.  95% of the movie was shot on a set that we made on the edge of a rice field.  We bought the rice crop out, and that was very good for the farmers because they got rid of the middle man.  We bought it for what it would have been sold on the market.  We didn’t even use all of the rice.  They got half of the crop back to sell again.  So they were happy  we were there, and a lot of them became extras in the movie.
I was thinking about the scale when I wrote the screenplay, and what’s going to cost money and what’s going to be hard work and cleverness, which is kind of how I started with Return of the Secaucus Seven.  I had the budget before I knew what the script was... I had $40,000, and back then, that was probably like $200,000 is now.  It’s still not much to make a movie, but I said, “what can I do well for this?”  This is the story I would like to tell, period or not.
And finally, the technology helped.  We shot this on a RED camera.  It looks great and saved us a lot of money.  I shot it in six weeks, which is actually a week more than I had on Honeydripper.  I only had five weeks on Honeydripper.  I’ve actually shot movies in four.  Every time you cut a week, you cut a big hunk of money.  You have to put people up and rent the equipment for another week and the other.  You have to keep churning and plan things really well. After 16 other movies—this was our 17th—you get more out of six weeks than you did when you started.  You learn how to plan things and to have a Plan B.
I went on the set while it was being built, and the only power tool there was a chainsaw.  Everything else was people tying things in bolos—knives and bolos... The chainsaw was there with a guy in his sneakers or flip-flops standing on a log ripping planks out of cocoa in between his feet, scaring the hell out of us.  The Philippines, I’m afraid, is like a walking OSHA violation.  We would talk to the guys, and they would say, “sure, sure,” and then you walk away, and they’d go back to the way they were doing it before.  Luckily nobody got hurt.

MD:  When will we be able to see Amigo?
JS:  It’s going to be at the New York Asian Film Festival before it opens here (in Southern California), and if you want to go to Manila, it’s going to open the fourth of July.  It’s really not going to show until August... and mostly we’re heading for cities that have a large Filipino-American population first.  It’s a company called Variance, and we’re basically paying them to distribute it.  They’ve done these kind of very narrow-cast distributions before, where they start with all of the Indians, or the Japanese or the Koreans in the States, and then they let it go out the art theaters if that’s appropriate.  That’s what we can afford.  We may make eight prints or something like that, which is kind of how we started.  Our first couple of movies did that.  It’s like a road show.  You move from territory to territory with those eight prints.  Now more of the theaters are showing digital, so you just make a good digital, and then it gets beamed up and beamed down.
Cooper Resabal's blog, Baryo Amigo HQ, chronicles the filming of Amigo in Bohol, Philippines.


Amigo releases in the USA on August 20.
Next...
Part 2:  The Craft of the Storyteller
Part 3:  The Future of Independent Film
Posted by Mark Dispenza at 11:45 PM

Email ThisBlogThis!Share to TwitterShare to FacebookShare to Pinterest
Labels: A Moment in the Sun, Amigo, John Sayles, Philippines