Nobody's Figured That Out Yet 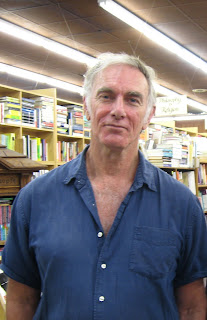 AN INTERVIEW WITH JOHN SAYLES
Part 3: The Future of Independent Film
I concluded my interview with John Sayles with a discussion about the future of independent filmmaking.  Big screen releases are becoming rare for indies in a world dominated by the push for big opening weekend grosses.
In the late '80s early '90s indies got a major boost from the success of Sex, Lies, and Videotape.   That film grossed an estimated 20 times its production budget and sparked the hunt for the next big thing in small dramatic films.  Sayles benefited from the hype by teaming up with Larry Estes, the producer who successfully backed the distribution of Sex, Lies, and Videotape.  Estes ultimately put together financing and distribution deals for two of Sayles' most successful films--City of Hope and Passion Fish, the latter of which earned two Oscar nominations and a Writers Guild of America (WGA) nomination for best screenplay.
These days traditional sources of film financing and distribution are not satisfied with the comparatively small earnings from indie films.  That market has all but dried up, and even the direct-to-cable market has downsized considerably.  Direct-to-DVD appears poised to follow with the growing primacy of Internet downloads.
Film festivals have increased in number and emerged as top venues for indie filmmakers who want their work to be seen on the big screen, but competition is fierce in first and even second tier festivals that currently receive well over 2,000 submissions per year for no more than 200 slots on average.  A lot of very good films are turned away.
Even Sayles is feeling the pain.  He self-financed his last three films, and he professed to me that he does not know how long he'll be able to keep it up.  As bleak as he made it sound, he couldn't bring himself to sound the death knell for the industry.  He recognizes that it's changing, and tomorrow's indie film industry will look very different from what we know today, but he was certain that the independent spirit will remain alive for a long time to come.
Although at times Sayles sounded like a tired, overworked filmmaker ready to pass the torch to the next generation, that spark in his eyes never died.  If I were a betting man, I'd lay big odds that Sayles has a few more master strokes left to contribute, and the indie film world will be that much better off when he does. 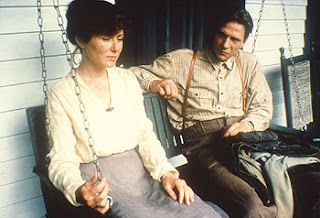 Mary McDonnell and Chris Cooper in Matewan
MD:  What's the future look like for indie filmmakers?
JS:  There used to be an independent movie business, and money came back in, but that’s kind of dissolved into the ether. Almost nobody’s getting other people’s money to make those little movies any more. Maybe if it’s a horror movie or a vampire movie, and you get the right actors in it, somebody will take a chance on you. There’s not really a straight-to-cable market any more, and I think Sundance got over 2,000 submissions last year.  That’s a lot of people trying to get through a very narrow doorway.
If they make two movies, whether it’s as a financier or a producer or a director, and they don’t get a release, it’s really tough to go and try to make that third one, and talk to all of your friends and say “I’m going to do it again. You want to carry all the stuff, and be called the co-producer and get paid nothing?” People still try to do it, but on your second movie you either have to pay people something or get new friends.
A very tiny minority will actually get somebody to distribute their film and spend money and time on them, and the rest of the people are going to be like garage bands. If you go on their blog, you can download the movie from them, and they’ll make very little money back from it. With a garage band, you can build up a following that way, tour and sell some t-shirts, and make sort of a living as a musician. I think movies will continue to be made, and people will continue to try to make movies, but I think that the hardest thing is that so many of the professionals that I know are not going to be able to make a living doing it. I wonder how many young people who are starting in the business, working now for free or very little, are going to be able to do it for very long. Remember when there were ski bums? I think in the future there are going to be film bums. Until their knees go, or whatever the film equivalent is, they’ll be able to sleep on friends’ floors and every once in a while make a movie, and support themselves doing other things.
MD:  You've been able to get top talent to work on your films for SAG (Screen Actors Guild) scale. If you have the right backing and an outstanding script, is that something you can continue to pull off?
JS:  Scale keeps going down if the budget of your movie is down. Recognizing how hard it is, the Guild (SAG) is doing a lot more of these contingency kind of things.  I talked to an actor the other day who is making $100 a day, and that’s a union contract, but the budget is low enough that that’s what the actors are getting paid. You’ve got to be in an awful lot of those to make a living.
The other thing to be said is that more and more, the kind of medium-level crew people—the PAs (production assistants) and the first ADs (assistant directors)—are all rich kids because they can afford to do it for very little money. Anybody that’s got to pay back their college loan, they’re not getting a paying job—maybe not for 5 years. Then you’re going deeper into debt and not paying off your college loan. 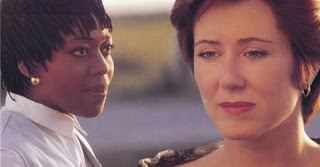 Angela Bassett and Mary McDonnell in Passion Fish
MD:  Where is distribution headed for indie films?
JS:  I really don’t think it’s going to sort out into something very consistent soon, because the Internet, which is the future of all entertainment transactions that aren’t live, is just a wild west right now. It’s changing so fast that nobody really knows where it’s going.
David Lynch was one of the first guys to do that. He had a movie, and he didn’t think the distributors were going to do much with it. He bought it back from them, and put it on his website. This was several years ago. I don’t know how he did with it, but I think that’s going to be the model more and more. If you’ve got some following, that’ll help, but the part where you get money back for it… nobody’s figured that out yet.
Larry's (Estes) first choice was Sex, Lies, and Videotape, and that gave him his mandate for about three years. We made two movies with him, and they were good movies (City of Hope and Passion Fish). It’s just that not one of them made the kind of money that Sex, Lies, and Videotape did. The corporation that owns Larry’s company finally said, “We want another Sex, Lies, and Videotape.  We don’t want you to make a lot of nice, little movies with the profits from that. We want another rainmaker.” And those happen almost accidentally. They were certainly movies as good as Sex, Lies, and Videotape.  When you finish a movie, almost nobody knows if they’re going to get to make another one.
MD:  You make it sound pretty bleak.
JS:  I think if you’re young, I wouldn’t be daunted.  In some ways our track record hurts us, because people say, “I’ve heard of this guy, but who’s ever made a mint on any of his movies.  He’s had 17 tries and he never went platinum.  Why would we gamble our money on this guy? Why not take somebody who’s totally new or who has made one interesting film and gamble on him instead?”
We’re talking about the impossibility of making independent films, and the fact is that people still do it.
Part 1:  The Making of Amigo
Part 2:  The Craft of the Storyteller
Posted by Mark Dispenza at 11:01 PM