A Chick Flick with Chutzpah 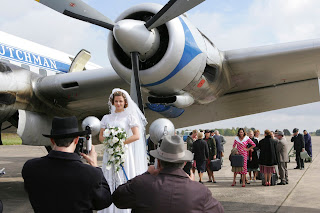 Bride Flight
Bride Flight debuted at the Palm Springs International Film Festival in 2010 and swept most of the major awards at the Newport Beach Film Festival a few months later.  After well over a year plying the festival circuit, including a strong Jewish festival niche (more about that later), this unique 2008 Dutch film finally received North American theatrical distribution this summer.
The story revolves around three young women who meet on the KLM flight that won a historic air race in 1953 between London and Christchurch.  The three are economic refugees fleeing the Netherlands for a better life with their fiancees, who are waiting for them in New Zealand.  During that fateful journey they encounter a man named Frank, who will change all of their lives forever.
A complex web of relationships develops among the characters that one would think better suited to the longer dramatic form of series television.  However, a terrific ensemble cast and a tight script bring all of the disparate elements together so that they ultimately arrive at a satisfying conclusion.
Bride Flight was directed by Ben Sombogaart from a script by actress-writer, Marieke van der Pol.  In many ways it's a standard chick flick with strong female leads and a one-dimensional male named Frank, who has little more to do than be hunky for the girls.  Through most of the film Frank is played in his younger incarnation by Waldemar Torenstra, who somehow manages to imbue an otherwise weakly developed character with charisma.  "Old Frank" is played by the always great Rutger Hauer, returning to his Dutch film roots for the first time in 18 years.
In a male-dominated movie world where female characters are too often "the girl," with little more to do than look hot and get upset only as a prelude to great make-up sex, it was more than mildly amusing to see the shoe on the other foot.  The genetically gifted Frank manages to make all the girls swoon, but then apparently spends all of his life alone and pining after the beautiful, hapless Ada (Karin Smulders), who is relegated to spending the rest of her own joyless life with the religious fanatic she married, all for the sake of her children.  Obviously some suspension of disbelief is required.


What makes this film rise above the flaws in the storyline, other than wonderful period production values and superb acting, is the character of Esther, played with depth and believability by Anna Drijver.  While Ada and Marjorie (Elise Schaap), the other members of the trio, choose more-or-less conventional paths for women of their time, Esther is fiercely independent, remaining childless and unattached, except for the occasional fling with lovers like Frank.
But there is a darkness that torments Esther's soul.  She is a Holocaust survivor (the aforementioned Jewish connection).  As a young girl she was witness to the butchery of her family in Nazi death camps, and in her little girl's mind, she has been traumatized into believing that being Jewish is an automatic death sentence, and she will not bring another Jewish child into the world.
Esther is a truly compelling character.  With all of the Holocaust-themed films released every year, one would think every angle has been covered.  This is a unique twist.  While we have witnessed the events of the genocide through the eyes of all kinds of characters, either at the time they happened or by flashback later in life, I cannot recall a previous film that dealt with what it must have been like for a survivor, especially one who experienced the horror at such a young age, to attempt to adjust to a normal life after that kind of trauma.
Filmmakers tend to view film festival review committee members like me as gatekeepers they hope they get past, but I can assure you that we want nothing more than to find the next truly great cinematic experience.  There is nothing more frustrating to me than finding a filmmaker who came within arm's reach of the summit, only to slide back down the mountain.
Romance fans may disagree with me, but I wish van der Pol had made a different choice.  Her story should have been entirely about Esther.  Instead of an entertaining romance genre film with aspirations, it could have been a magnificent film with awards buzz.

Posted by Mark Dispenza at 9:28 PM