In Love with a Fantasy 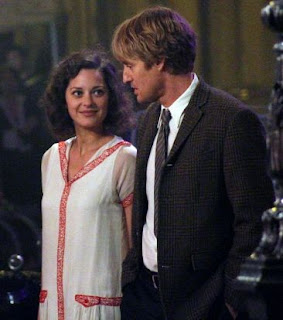 Midnight in Paris
Midnight in Paris both celebrates and skewers the romantic ideal of the City of Lights. Filmmaker Woody Allen populates his latest outing with a variety of wonderful characters, each in search of a utopia rooted in their own fantasies and illusions.
The director's latest neurotic alter-ego is Gil, played by Owen Wilson in the typically verbose style of Allen protagonists.  Gil is a Hollywood hack writer who believes that he was born too late and would much rather live in the romanticized era of Paris between the wars.  When his fiance's parents invite the two of them along on a business trip to Paris, Gil jumps at the chance, hoping that the sights and sounds of the great city will inspire him to finish the novel he has struggled so hard to write.
Trouble develops when Gil's fiance, Inez (Rachel McAdams), runs into her former college crush, an arrogant intellectual named Paul, played by Michael Sheen.  Inez has much more fun hanging out with Paul, while Gil prefers to walk the streets of Paris in search of literary inspiration.
On one of his pedestrian excursions, Gil discovers a place where he is magically transported back in time to the Paris of the late 1920s on the stroke of midnight each evening. On the first night he is whisked away to a party by Scott and Zelda Fitzgerald and begins a nightly adventure hanging out with a "who's who" of the leading artists and intellectuals of the time, including Ernest Hemingway, Pablo Picasso, Paul Gauguin, Henri Matisse, Cole Porter, Josephine Baker, Salvador Dali, and Gertrude Stein, among others. 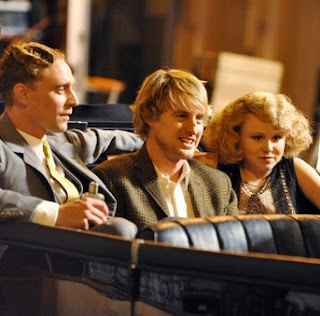 All of these famous people are played as virtual caricatures by actors who appear to be having as much fun hamming up the roles as we are watching them.  Adrien Brody positively steals his scene in a cameo as a rhinoceros-obsessed Dali, while Kathy Bates dominates as "Gert" Stein.
Gil falls in love with an artist model and Picasso paramour named Adriana (Marion Cotillard), only to find his romantic notion of staying in the period with her dashed by Adriana's own obsessive desire to be transported back to la Belle Epoque of 1890s Paris.  Gil learns an important lesson.  When we stop imagining that some other place and time is better, we may well find that our golden age is the one we're living in right now.
The storyline of this film is simplistic and the camera's lingering focus on Parisian street scenes is positively dripping with romantic self-indulgence.  In spite of that, if you are a lover of Paris or the great artists and intellectuals of its history, it's really going to be difficult for you to hate this movie.  So screw it... go see it.  It's every bit as good as Allen's Vicky Cristina Barcelona and a helluva lot more fun.
Midnight in Paris opens nationwide on May 20.

Posted by Mark Dispenza at 8:01 PM