On the Road Again in Italy 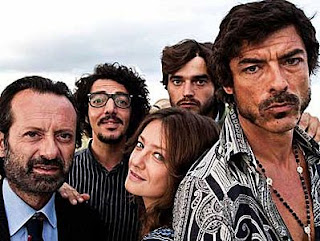 Basilicata Coast to Coast is an Italian comedy about adult men becoming grownups at last.  Friends since childhood, four part-time musicians decide to take leave of their families and ordinary lives to cross the southern Italian peninsula on foot to play at a music festival on the opposite coast.  The normally 90-minute bus ride from Puglia to Calabria takes them 10 days as pedestrians, with only a donkey cart to carry instruments and supplies.
Tropea, a journalist whose own career has hit rock bottom and digging deeper, reluctantly accompanies the men to create a video documentary for whomever may one day care enough to watch.  During the course of the journey, each of the travelers confronts their inner demon, with comic and sometimes touching results.

The film has a lot to say about the clash of youthful expectations with the realities of life.  One sequence in particular follows the travelers as they enter an isolated town they've heard is populated by young, beautiful women.  On arrival the men gawk open-mouthed at a street teeming with so many hotties that it looks like the opening of a national beauty pageant (a scene that was far too short in my opinion).  When they are invited to the town's big dance that night, they arrive as excited as little boys, only to discover that the town's population of men is so large that each woman must dance simultaneously with two men.
The strength of Basilicata Coast to Coast is in the wonderful, quirky characters that populate it, and the actors that play them--including the beautiful Basilicata region that is a character in itself.  The film is a terrific directorial debut by actor Rocco Papaleo, who also co-wrote the script for this first feature and stars in it.  It is definitely an actor's movie, strong on character but somewhat predictable in story.  I found it to be entertaining, although it doesn't break any new ground.
The story may not be unique, but Papaleo does execute it effectively, and he brings it to a close that underscores the old wisdom that life is not about the destination anyway.  It's about the journey.
Posted by Mark Dispenza at 2:03 PM