There's One in Every Family 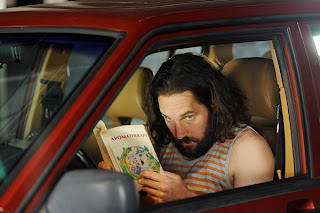 ﻿
Our Idiot Brother
by Zac Sanford

The black sheep of the family teaches his siblings a thing or two about life in Our Idiot Brother, a family drama with a comedic edge.
Everyone has someone in their family they try to avoid for one reason or another.  To his family, Ned (Paul Rudd) falls into that category, and even if he isn’t the brightest, everything he does is meant with the best intentions.

Ned is the type of modern day hippy who sells his own homegrown produce at a small town farmers market in upstate New York.  Everything is going smoothly until Ned is approached by a local policeman, in uniform no less, who has fallen on hard times and would like to buy some marijuana.  Since he’s such an upstanding person, Ned offers the policeman a bag of weed free of charge, but the officer insists on paying for it.  Once Ned obliges he’s hauled off to jail.
Now you may be saying that any attorney could set Ned free based on entrapment, but this movie doesn’t go there.  Ned spends time in the slammer and is released early after winning “best inmate” four months in a row.  He stumbles back to his farm to find that his girlfriend, Janet (Kathryn Hahn), has moved on to Billy (T.J. Miller), another happy-go-lucky stoner, and she refuses to return his beloved dog, Willie Nelson.
This leaves Ned with no choice but to seek refuge and comfort within the homes of his three sisters until he can save enough money to move back to the farm.  Once there he plans to accept Billy's offer to rent the goat barn and be reunited with Willie.
Once Ned lands in the home of his oldest sister, Liz (Emily Mortimer), and her director husband, Dylan (Steve Coogan), he is offered a gig helping Dylan on his latest shoot.  After catching Dylan shooting a portion of the documentary with his subject in the nude, Ned thinks nothing of it as he’s told “being naked helps one get to their true emotions.”  This doesn’t even sit on Ned’s consciousness until he lets the memory slip to his sister, Miranda (Elizabeth Banks), who realizes Dylan is having an affair. 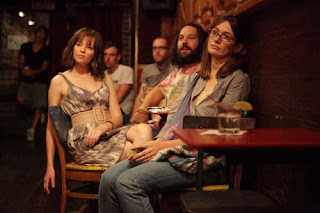 Elizabeth Banks, Paul Rudd & Emily Mortimer
From this point on, Ned is bounced from home to home, creating a ripple effect with each of his family members.  Things come to a head when one sister, fed up with the situation she believes is caused by Ned, gives him the money he needs to move into the goat barn.  No one is able to see their faults until Ned comes into their world and unearths the unlikable characteristics that each harbor.
Is this a perfect film?  No.  But is it enjoyable?  Yes, in large part due to Paul Rudd's portrayal of Ned.  The sisters all come across as unlikeable and downright mean to their beloved brother, who just wants to feel like he belongs.  Everything he does and says is to live a life of truth and honesty, a life that his sisters don't relate to.
This film has been mis-advertised across the board.  While the ads point to a good time led by Ned, Our Idiot Brother delves deeper into the family dynamic and ends up being more of a drama with slight bits of comedy thrown in.  Had Ned been a straight man in the script, this would have been billed as a drama, but his character gives the formula a fun new twist.
As the summer comes to a close and the studios start to dump the duds on the multiplexes, I would recommend you catch this light-hearted romp.  Even if Ned gets on your nerves at times, and you just want to yell at him to grow up, maybe there’s something deeper down that needs to be explored.  Hopefully you have your own idiot brother to help you.
The film was acquired from The Weinstein Company at this year’s Sundance Film Festival after it played to sold out crowds.