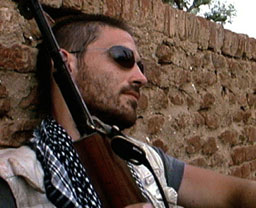 As Americans engage in solemn remembrance this weekend, I'm reminded of the incredibly gutsy journey the events of 9/11 inspired in a group of young indie filmmakers.
Within months of the fateful date, filmmaker Christian Johnston, previously a director of commercials, his co-writer, Christian Van Gregg, and actors George Calil and Wali Razagi, sneaked across the border into Afghanistan on faked credentials after being expressly warned not to do so by US Government officials.
Without diplomatic protection or bodyguards, the four young men roamed locations in and around Taliban-held Afghanistan and shot a faux-documentary in true indie guerilla style, utilizing Afghan locals in scenes that were often improvised on the spot.  In retrospect the project was incredibly naive and foolish, and the four were lucky they survived to edit and produce the finished film.
The result was September Tapes, a feature film inspired in part by the success of The Blair Witch Project. The plan was to create a documentary-style web site ala Blair Witch to build a strong fan base prior to release of the film.  Although the project fell short of Blair Witch success, it did manage to gross over $2,200,000 worldwide on a declared budget of $30,000--not a bad take for a low-budget indie feature.  Following its 2004 Sundance premiere, September Tapes became an audience favorite at film festivals around the world before going into worldwide theatrical release.
The story is a journey, reminiscent of Joseph Conrad's Heart of Darkness, by American journalist Don Larsen (Calil) to locate Osama bin Laden and find the answers that have obsessed him since his girlfriend was killed in the attack on the World Trade Center.  With his Afghan-American friend, Wali Zalif (Razagi), to interpret for him, he seeks out the warlords of the Northern Alliance to gain intelligence on bin Laden's whereabouts.  Larsen and his team get arrested for taking photographs, and while incarcerated, they learn about a bounty hunter named Babak Ali (played by himself), who may be able to locate bin Laden for them. 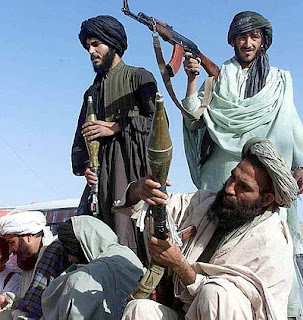 Local actors
Viewers of the film have called it "more realistic than network news," and it's easy to see why.  Outside of the small group Johnston took with him into the country, the film used all Afghan locals in principle roles and as extras.  Most of them had no professional training, which added to the documentary effect.  However, it also meant that live ammunition was shot around and over the heads of the actors during gun battles, and the locals often got carried away.  During the tense scene in which Larsen is arrested, the real local cops, acting as themselves, got a little rough when pulling the actors from their vehicle.
Tragically,writer Van Gregg did not live to see the audience response to his work.  He took his own life in 2003 at age 29.
September Tapes is available for download on Netflix or Amazon.