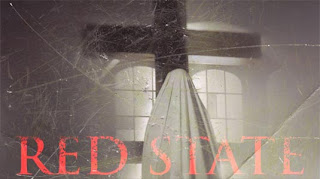 After creating his own cult following of stoners and slackers, Kevin Smith grows as a storyteller and filmmaker with his latest low-budget film, Red State.
I must start this post with a bit of an advanced warning. When I was young I was a fan of Kevin Smith. I was enamored with Clerks when I rented it on VHS, laughed many times at Mallrats with my friends and then fell in love with Chasing Amy. Amy still holds up as one of the films that I'll throw on and watch at least once a year. There's something about the honesty there, and it spoke to me as an eighteen year-old with a broken heart.
After Chasing Amy I still thought there was some merit to Dogma, but I fell out of touch with Kevin as a screenwriter and filmmaker. My guess? I grew up. I got over the juvenile humor that is peppered through a typical Kevin Smith film. Also he didn't really grow to the next level as a filmmaker. The camera just held steady as his characters talked--characters that I could no longer relate to or care about their journey. But that has all changed with Kevin's return to the writer/director chair after his short stint in the studio system.
Red State begins in typical Smith territory. There's three teens (Michael Angarano, Kyle Gallner and Nicholas Braun) who have scored the opportunity for a threesome with an older lady. Once at her trailer, the film finally ramps up and moves out of the stereotypical Smith comedy. Sara (Melissa Leo) offers the trio some beers, which have been laced, causing them to all pass out.
Jarod (Gallner) comes to and finds himself in a cage that is covered and being rolled out to a destination unknown. In the background a sermon from Abin Cooper (Michael Parks) starts.  He spews out all that is wrong in this world, not only to him, but to God. His words are full of hate of any view that doesn't fit with his own. Parks knows when to add a pause, when to add emphasis and where to add an extra bit of punctuation in what would normally be an overly long monologue just short of 15 minutes.
About halfway through the film, the ATF is called onto the scene, as there is suspicion something sinister is going on behind closed doors. Joseph Keenan (John Goodman) is ordered by an unseen superior to go against his better judgement while handling the Cooper situation. The film explodes into a mix of gunfire and action that goes on a little too long. In the end no character is safe, nor is any character redeemable enough where you want to root for them to survive. 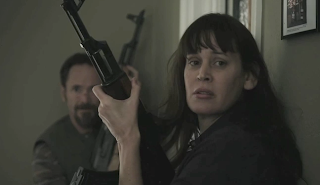 The film hits the final point home in an epilogue that isn't entirely necessary. It gives the viewer some closure, but I feel it is Smith talking down to his typical fan, answering any questions they may have had about the resolution.
Tonally Red State is all over the place, but for some reason it works for me. It jumps from a teen comedy to a horror film with a monster that could exist within the real world. Once the film gets to the halfway point it, jumps to an action film until it ramps down to a bit of social commentary in the end. Kevin doesn't only point the finger at the Cooper Family (inspired by the Westboro Baptist Church), but at the government and politics today. For those reasons, along with the strong performances of Michael Parks, John Goodman and Melissa Leo, I must give this a passing grade.
Kevin Smith is currently self-releasing the film for one night only on September 25th in movie theaters through his Smodcast Pictures banner. The film is currently available by Video on Demand through the website www.coopersdell.com.