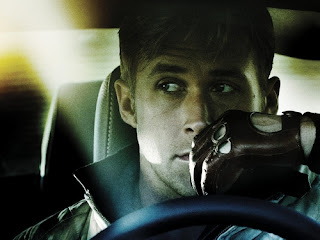 Drive is the kind of film you get when you put an A-list cast and crew on a B-movie story.  Director Nicolas Winding Refn channels Sergio Leone by taking the "Man with No Name" (Clint Eastwood in Leone's films) and putting him in a noirish crime drama instead of a western.
In this case the Man is Ryan Gosling as the Driver.  He doesn't say much at all during the film, but when he does, people listen.  Gosling never disappoints, and he is brilliant here in his ability to convey the thoughts and emotions of his character by means of subtle facial expression instead of dialogue.
Refn, Danish by birth and New Yorker by upbringing, brings a European flare to the stylistic treatment of his subjects and scenes of explosive violence.  Like Leone, his attention to the subtle nuances of even the most minor of characters will keep you intrigued every moment of the film.
The story really isn't much, and you've seen it all before.  The Driver is a young man who works in a garage and part-time as a stunt driver for the movies.  He's also a driver in shady side jobs arranged by Shannon (Bryan Cranston), owner of the garage.  The Driver is a stoic, cold person who doesn't talk about his past, but he does have absolute confidence in his ability to drive, and there is nobody better behind the wheel of a car.  He doesn't laugh.  He doesn't love.  He drives.
That changes when he meets his neighbor, Irene (Carey Mulligan), currently living as a single mom because her husband is in prison.  The Driver falls for Irene and will do anything to protect her and her young son, with whom he develops a powerful bond. We can only speculate as to how they somehow penetrate his tough emotional armor, as we are never told anything about the Driver's past, but somehow, without being told, we know. 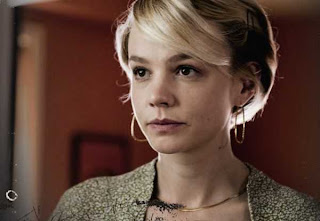 Carey Mulligan as Irene
We know that the Driver had a hard childhood, raised by his mother, and that his father was absent from his life for reasons unknown, and we somehow know that he wanted his father to be there for him in a very bad way. Shannon, the only other person that the Driver cares about, has become the father he never had. He knows that Shannon is less than perfect, but he doesn't care about the man's weaknesses. He's always there and he's always got the Driver's back.
But I digress. This is pure speculation on my part. None of it is in the script, but nonetheless we get it.  That's the beauty of what the best actors can convey for us, and this film is rich in great actors. Even the villains, headed by Albert Brooks and Ron Perlman, are fascinating.  It's easy to forget that Brooks is a comedian when he makes such a cool, calculating gangster.
The Driver's brief moment of happiness ends when Irene's husband is released from prison and returns to his family.  Some shady prison connections have their hooks in him, and unless he plays ball and commits a robbery for them, they will harm his wife and child.  The Driver finds out about it and agrees to help to protect Irene.  Unfortunately they've been set up and the job goes badly.  Everything goes to hell quickly after that, and no one the Driver cares about will escape the consequences.
Drive is the kind of film you really don't want to like.  The storyline is simplistic and its internal logic has more holes than a pound of swiss cheese, but the characters are so compelling that we are more than willing to extend that old suspension of disbelief.  We know that the Driver is a bad guy, and that becomes clear in moments where he loses his temper and lashes out at his tormenters.  By the way, those moments of violence are not for the squeamish.  You've been warned.  But we want him to prevail in spite of all that, because we want to believe that there's good even in the worst of us, and protecting Irene and her son is a good thing.
Drive is going to have legs long after its theatrical run is over.  It's the type of film you'll run into on late night cable, and you'll watch it again and again.