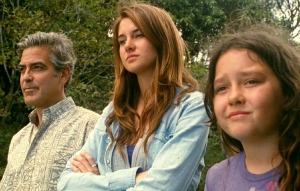 Love, Loss and Doing the Right Thing
by Zac Sanford

After bringing several unlikable characters to the screen, Payne returns to the helm after a seven-year hiatus with his most accessible film to-date. It isn’t that Payne makes stereotypical art house fare that is slow and brooding in its undertones. It's just that his characters are at a point in their lives where they come across as bitter, almost to the point of being unlikable.

In The Descendants, Matt King (Clooney) is an overworked, well-paid real estate lawyer living in the paradise of Hawaii. Matt’s voice-over tells the audience that the islands are just like any other place in the country. The locals have the same health problems,and they still have a homeless epidemic.

Matt has every right to be bitter in his assessments. His life is thrown into a tizzy when his wife is sent into a comatose state after a boating accident. He’s always seen himself as the “backup parent, the understudy,” when it came to being a parent to his two daughters. Young Scottie (Amara Miller) is acting up in school and bullying other students. 17-year-old Alexandra (Shailene Woodley in a star-making role) is off at boarding school like many other rich kids who have acted out during their teen years.

After picking up a drunken Alexandra at her school on the big island, she confesses the reasons why she has been so bitter to her mother in the past, Elizabeth (Patricia Hastie) has been cheating on Matt. Not only is his wife dying, but now he’s left with questions for which he has no answers. 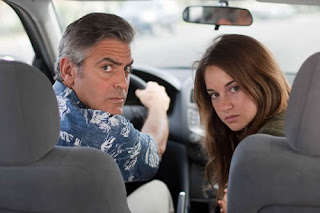 
So in typical Payne fashion he brings the troops together to go on a journey. Not only must they tell the family that they will be pulling the plug on Elizabeth, but Matt has it in his heart to find Brian Speer (Matthew Lillard), the man who slept with his wife, so he can pay his final respects. This is where the bond grows between Matt and his eldest daughter, who transforms from the angst-filled teen to his closest confidant and ally.

The script, co-written by Payne and Jim Rash, and adapted from the novel by Kaui Hart Hemmings, constantly shifts in tone, never allowing any scene to go too heavy on the melodrama. When things start to get heavy-handed, the tension is interrupted by a bit of humor, usually at the hands of Alexandra’s friend Sid (Nick Krauss). While he is mainly used as comic relief as the dim-witted surfer, he’s actually given one of the better scenes with Clooney.

The rest of the phenomenal ensemble cast includes Robert Forester as the grieving father of Elizabeth, Beau Bridges as the money-hungry Cousin Hugh, who is pushing for the big sale of land, and Judy Greer in an astounding dramatic turn as the wife of adultery-prone Brian Speer. Each are given their moment to shine, especially Judy Greer, who in the past has been relegated to the love interest's best friend in countless romantic comedies.


My only complaint about the film is the amount of time dedicated to the selling of the biggest untouched land parcel on the islands. The King family are descendants of one of the first royal families of the islands, allowing the parcel to be passed down from generation to generation in a trust. Now the time crunch has kicked in, forcing the family to make a decision on whether to sell the parcel off to a developer, who will turn it into yet another tourist destination. Since Matt is the executor of the trust, he is faced with the dilemma to either sell the land to one of the two interested parties, or to eventually bequeath the land to the state. There are a couple of contrivances that bog down this storyline, and the screen time could have been better used elsewhere.

Ultimately The Descendants is one of the stronger films to come out this year. While the advertising campaign has leaned a little too heavy on the comedic aspects, the film should have a long run as word-of-mouth allows expansion past the typical art house markets. Come awards season several of the supporting players, along with Payne and his writing crew, should grace the stages of award ceremonies for some well-deserved kudos.