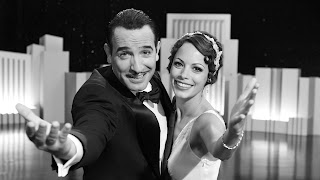 SILENCE IS GOLDEN
by Mark Dispenza
One of the year's best films has very little to say, and it's shot entirely in black and white.  The Artist is a homage to the silent film era, but it has decidedly modern sensibilities.

In The Artist French director Michel Hazanavicius takes on the very timely story of a man coping with a traumatic career transition, using the allegorical tale of a silent film star struggling with career obsolescence at the advent of talkies.

The film opens at the 1927 Hollywood premiere of "The Russian Affair," starring George Valentin, played by Jean Dujardin with dash and a cheery bravado that channels Douglas Fairbanks, Rudolph Valentino and John Gilbert, a lesser known actor upon whose life the film is actually based.  Valentin is always accompanied by his co-star (played by Uggie), a Jack Russell terrier with lots of personality.

While clowning for the press in front of the theater, Valentin literally bumps into Peppy Miller, played by Berenice Bejo, a delightful young woman who Valentin quickly discovers to be a natural talent in front of the camera.  Valentin is smitten with her, and as her career climbs to new heights, he particularly delights in their dance scenes together. 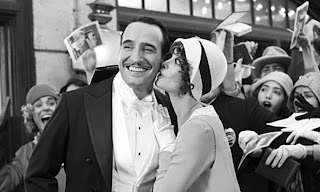 Jean Dujardin and Berenice Bejo
But there are clouds on the horizon for Valentin.  A new technology that allows films to "talk" has become popular, and while Miller's career soars to new heights, Valentin's goes downhill fast.  Hollywood doesn't believe that Valentin is a fit for the new talkies.  John Goodman plays well to-type here as a cigar-chomping Hollywood producer and bearer of the bad news.
The star goes out on his own, but his films have lost their audience and Valentin finds that he is now a has-been.  His marriage falls apart and he is forced to sell everything he owns just to survive.  All of the bling and flash of his former existence is gone.  His only friends are his trusty canine companion and a loyal chaffeur (James Cromwell) who steadfastly refuses to be fired.  Valentin becomes depressed and even suicidal. 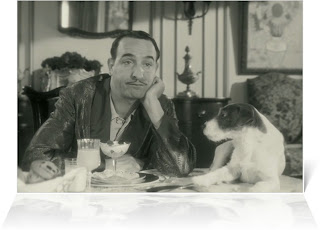 It's in that state that Miller rediscovers her former mentor and resolves to rescue him from despair.  Unfortunately it's a big job that even the perennially upbeat Peppy will find to be the greatest challenge of her career.
The Artist is an immensely entertaining film with a big heart.  Seeing it was the most fun I've had since Woody Allen's Midnight in Paris, and it's becoming just as popular with audiences.  Dujardin took home the Best Actor award at Cannes, and The Artist quickly became a favorite on the film festival circuit.
The first half of the film is pure entertainment and will delight you with its very effective tribute to all that was magical and wondrous about movies in the silent era.  I found the downfall sequences in the second half to be overly long and tedious, and it would have certainly benefited the film to have ten minutes or more of those scenes cut.  It's one thing to have Valentin's decline vividly depicted and quite another to experience his torment in excruciating detail.
Don't be fooled into thinking that The Artist is simply a good silent film that brings to life the nostalgia for a long-lost era in Hollywood.  Although it is that to some degree, this is a complete reinvention of the silent black and white film.  I can't tell you much more than that.  You know... spoilers and all.
The Artist has Best Picture Oscar buzz, and you'll just have to see it to understand why.   It went into nationwide theatrical release on November 23.
Posted by Mark Dispenza at 7:42 AM